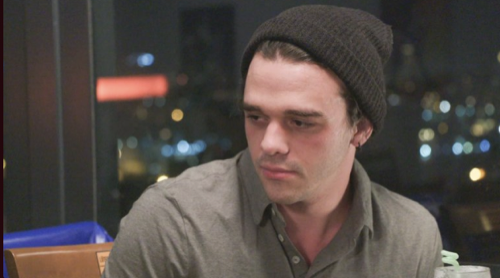 In tonight’s 90 Day Fiance episode, Kim is a good person. But her judgement is skewed. Kim traveled halfway across the world to meet up with Usman and Usman told her upfront that he saw her as a potential girlfriend. Not as a girlfriend. Not just yet. He still wanted to explore his possibilities and that’s why he asked her to come out to see him. He was looking for an American woman to use. She fit the bill. The only problem is that Usman isn’t rushing into the relationship like he did with his ex-wife. Usman told her that he wants to take his time and so she thought they would take it slow. Not that they would be practically be dead on arrival.

Kim expects kisses. She expects hugs. She even got into bed with him to see where things go and he couldn’t take the lead from there. He couldn’t bring himself to sleep with her. Like, what kind of man can’t sleep with a woman he claims to be attracted to? Kim was his type in the essence that she was a middle age white woman like his ex-wife and she was prepared to show him her love. She brought him gifts. She supported his music career as one of his biggest fans. She did everything she could and he just doesn’t want to be with her. That’s becoming pretty clear by now. It seems he could fake it with Lisa and he couldn’t with Kim.

Kim asked Usman to sleep with her room. She asked him in spite of this going south once before and he refused her. He didn’t want to give up his room. He wanted his own space. He also told her that any demands of intimacy reminds of his ex-wife. The same ex-wife that’s technically not an ex because they were still married by this point. Speaking of marriage, Jasmine finally got out of hers. Her divorce was finalized while she was with Gino and so her friends took her out to celebrate. They threw her a divorce party. They couldn’t go out to the clubs because of a covid curfew and they instead arranged a hotel suite to party in.

Jasmine’s friends asked her to come out without Gino. He left in their hotel room while she went partying with her friends and the reason he wasn’t invited soon became clear because the friends arranged a surprise for Jasmine. They brought in a stripper. A young, handsome, and built stripper. He gave Jasmine a lap dance and it was widely impropriate for someone who was so jealous herself. Jasmine hated Gino even talking to other woman. She accuses of flirty for merely leaving a tip for a waitress. Her actions therefore were in poor taste. She would never have wanted Gino to do that to her and so she shouldn’t do it to him.

Jasmine was gearing up for an awkward encounter with Gino. Meanwhile Alina already had hers with Caleb. She and Caleb were in the middle of having sex when her friend interrupted them. It was embarrassing. Her friend had a key and he came in to grab a brush because he was going out. But Elijah didn’t feel embarrassed about walking in on them. It was the couple that was embarrassed. They later talked to Elijah and he was still making jokes. He was also pushing buttons. Elijah suggested they play “never have I ever”. It was a drinking game in which someone said outlandish and you drink if you done it and don’t drink if you haven’t.

Elijah’s first never have I ever was that he had never slept with over a hundred women. Caleb drank. It made Alina fear that he could just be a player and the night to go downhill from there. Elijah’s next one was about keeping a secret from someone. Caleb knew it wasn’t him. It had to be Alina and she told him she’ll tell him the truth back at the hotel. She didn’t want to do it at a restaurant. Alina and Caleb’s relationship was already fraught as it is because they didn’t really know each other in spite of being social media friends for over fifteen years and so Caleb wasn’t ready for Alina to be keeping secrets. It made him question the relationship.

Over in Tunisia, Memphis and Hamza’s trip to the consulate didn’t go as planned. Hamza wanted to take a bus and Memphis said she wasn’t getting on a bus. She also asked Hamza why he didn’t have things arranged from before she even came to the country. It wasn’t like the consulate was some tourist thing. They wanted to get married. She wants to bring him to the United States. She couldn’t do any of that without their trip to the consulate and so Hamza should have planned. He should haven’t left everything to the last minute. It made Memphis question if he’s the one for her. She thought him immature and she constantly felt like she has to parent him.

It doesn’t help that she also recently learned that he lied about his age. It was a mere two years and so there was no reason for it. If anything, it could have derailed him coming to the United States. Hamza had no real reason for why he lied and not planning anything to get them to the consulate on time was once again signs of immaturity. It was an appointment. They could not nor should not be wasting anyone’s time. Memphis also felt like she wanted someone to lean on and now she’s not sure if that’s going to be Hamza. He has the unfortunate habit of taking everything as a joke. And their marriage isn’t a laughing matter to her.

Ella found herself not laughing either when her boyfriend Johnny gave her another reason for why he can’t come to the United States. At the time this was filmed, the delta variant was running rapid. Johnny used that an excuse for not wanting to come over and that left Ella doubting him. This wasn’t the first time that Johnny came up with an excuse not to visit. Ella also realizes that each and every time she brings up his parents or their thoughts on the relationship that he changes the topic. Ella was afraid his parents might not approve of her. She also heard from her Asian friends that family is a big part of Johnny’s culture.

Johnny might not want to come over because they didn’t want him to leave. Johnny has a son as well. He was potentially leaving them alone with his child and so Ella had a right to be worried. She knows that unless Johnny fixes whatever is going on with him he won’t come to the U.S. Ella has been looking for a long time to love someone as she loves Johnny and she calls him her Asian prince. Ella truly wants her relationship with him to work out. She later called him on video chat to discuss why he couldn’t come because she didn’t think the pandemic was that bad and he told her that was a very American thinking.

Johnny also said that getting sick in America will bankrupt him. He didn’t have to worry about that in China because they have free health care and so he genuinely did seem like he was afraid of the pandemic. Something that Ella wasn’t. Ella was still going out and meeting up with friends. They’d have drinks. They’d eat. She doesn’t seem frightened by any of it and so that’s where the two differ. Johnny wants to be cautious. He told Ella that his parents aren’t an issue. They were fine with him moving to the United. It was the pandemic that had everyone worried. Not Ella. Ella didn’t seem to acknowledge that because she basically issued an ultimatum.

Either Johnny comes over soon or she’ll rethink their relationship. Kim was rethinking hers. Kim prides herself on not being like Lisa and not be someone who nags. But Usman has to figure out what he wants. He needs to know if its her or not. If she’s the one for him, she would go to the ends of the earth for him. Kim is very loyal. She’s very sweet. She’s putting everything into this relationship and getting nothing back and she was starting to realize it. Kim gave him serious attitude after he turned her down again. And he must have gotten worried because Usman later changed his mind about sleeping in her room.

Usman came over to her room. He asked if he can sleep there and she said he could. She was just so glad for a sign of something that she didn’t consider why he would want to sleep in the same bed as her and not want to touch her. Usman even put a pillow between them. It was clear he wasn’t interested in her romantically. He was just doing this for his career. He was stringing along this innocent woman who wants to be loved knowing that he wasn’t going to love her. Usman is a user. He also can’t sing. That was autotune doing the work. Not him.

Jasmine’s friends recorded her with the stripper and so Gino did get jealous. He did get angry. He knows that he could never do that to her because she would flip out. Jasmine would kill him if he ever did something like that. And so she’s lucky he didn’t just leave right then and there.

Alina came forward with her secret and Caleb tried to understand, but now he doesn’t want to define the relationship because he’s not sure if there’s way they can move forward.

Ben flew out to Peru to meet up with Mahogany.

And Ximena told Mike all the things he hasn’t to change about himself to get her to marry him.