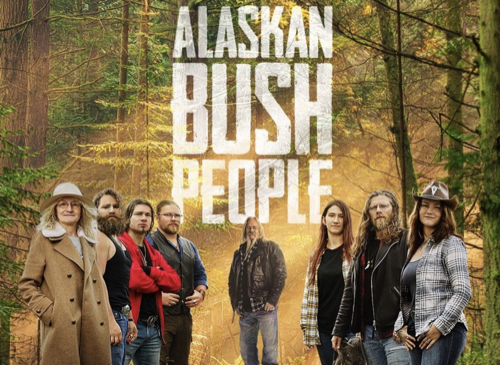 Tonight on Discovery Alaskan Bush People airs with a new season where the Wolfpack faces the biggest challenge on an all-new Sunday, October 2, 2022 episode and we have your Alaskan Bush People recap below. On tonight’s Alaskan Bush People Season 13 Episode 2 “Brave New World,” as per the Discovery synopsis, “Spring ambitions push the Wolfpack into new directions. Gabe and Bam turn burnt trees into lumber and Noah reveals epic Alaskan plans. Bird faces a life-changing crisis while Bear and Raiven decide to begin their family life up on the mountain.”

In tonight’s Alaskan Bush People episode, the children in this family grew up wild. Their parents followed God’s law rather than man’s law. They brought their kids live out in the wilds of Alaska. But things have changed. They’ve been changing since the patriarch of this family passed away.

Billy Brown left big shoes to fill and some were doing their best to try and fill them. They were unfortunately just too many problems sometimes. Billy was mostly the force keeping his family together. It was original his dream to live in the wilds and his wife and children learned to love it from his sheer love of it. Without him, the family hasn’t been the same. There was so much that has changed and their dream of a family ranch hasn’t progressed as they thought it would.

The family lost a lot in that forest fire. Their mountain went up in flames. It burned down most of their houses as well as their infrastructure. It scared away the animals. Most of the family weren’t living up on the mountain. They were living in the town below. They had to because some of them had grow families that needed a place to live after the fire and they’ve admittedly been slow in moving back now that the forest is recovering. But the animals are back. The family got most of them back up the mountain and they opened tonight’s episode by building a new pen for their horses.

But it wasn’t easy working on building new structures. It wasn’t like when their dad was around. He made every moment interesting and he taught them everything they knew and yet they struggled with building that pen. Gabe kept making mistakes by not cutting down the trees properly. His older brother Bam Bam had to step in several times. Bam Bam kept the family progressing towards what he needed them to do. He also kept his mother in the loop. Bam Bam didn’t look outside and see burnt trees. He saw 2x4s. He told his family that they can start building with those and he was all gun ho to do it. He just didn’t have the machinery.

They tried to do it by hand. They tried to carry this large tree trunks across the backs. It tired them on the first one and they realized they couldn’t keep doing that with the rest. It was a hard task. It was a little too big for just three people. Bam Bam, Gabe, and Bear were trying to do it all. Noah had actually moved away, but he and his wife wanted their kids to grow up in Alaska and so they came back. Noah’s family was currently living out of an RV. He was making mechanical horse feeders, when out of nowhere, he missed home. Neither he nor his wife wanted to move up the mountain or live in a tent again. They just wanted to be near the family again.

The family wanted to be a family again. Bear and his wife were experiencing some problems. They’ve been through too much change lately and its making their problems seem bigger than they actually are. Bear went to his sister Snowbird for advice. She tried to be there for him. Only she really didn’t know what to say. Snowbird was probably one of the family members struggling with her father’s death the most and so her family chose to help her out. They went looking for some of their father’s writing. Billy would write in literally anything and everything. He would put his thoughts down. And that’s what the family needed.

They needed their dad. But they’ll take his words if they couldn’t have him. Billy always knew what to say and it was either through his stories or his dreams that he could reach to his kids in a crisis. The family even got their nickname from one of his stories. They were the wolfpack thanks to Billy. Now, Snowbird was struggling. She lost her very first home in the fire. She just cut down the tree where her house was built. She originally thought she could keep that tree up forever but now she realized she has to let that go as well as everything else she lost. And so the one thing she couldn’t let go was her father’s journal.

Snowbird read her father’s final words. But naturally it wasn’t enough for her. She wanted more of him. She wanted a story or to hear that it was okay for her to move on without him and his writings didn’t give her that. The family had hoped hearing his final writing would help Snowbird to move on. To start dating again. To look towards the future. Everyone thinks Snowbird should have a family by now and she was resisting the idea. Its like she was scared to move on. Something they couldn’t help with her because she was still looking for help from her father and she wouldn’t accept it from anyone else.

Snowbird didn’t even move into her own RV. She was living out of a tent because she gutted the RV so that it could just be for her cats and her cats alone. The place now wasn’t fit for humans. Not that Snowbird let that stop her from wandering or sleeping on the fire so that she could wake up to her cats licking her. And so she wasn’t exactly putting herself or what she needs first, but her mother gave her a letter and she asked Snowbird to open it in Moseman.

Moseman was where Billy and Ami decided to live in the Alaskan life. Ami thinks that’s where Snowbird will find inner peace and Snowbird considers her mother an extension of her father. So, she’ll go.

As for moving the trees, they got help from machines and from Noah and that helped.