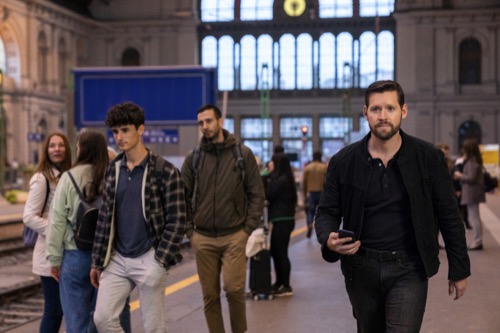 Tonight on CBS FBI: International airs with an all-new Tuesday, October 18, 2022 season 2 episode 5, “Yesterday’s Miracle” and we have your FBI: International recap below. In tonight’s FBI season 2 episode 5 as per the CBS synopsis, “The Fly Team searches Bucharest for a Romanian surrogate who goes missing shortly before carrying the biological child of an American couple to term. Also, Forrester’s concern about the safety of his neighbors in Budapest intensifies.”

In tonight’s FBI International episode, Supervisory Special Agent Forrester didn’t forget about Zsolt. He tried to approach Zsolt’s father. He approached the man as someone that was just concerned about Zsolt’s well-being and Peter fobbed him off. He said Zsolt was none of Forrester’s business. But it was his business when a twelve old year old kid came to him for help. Zsolt’s family was mixed up with the mob. His father got beaten up. Zsolt was covered in his father’s blood when he talked to Forrester and there was nothing the FBI Agent could do about it because the family refuse to go to authorities for help. It didn’t matter what Zsolt wanted. He was just a kid. It was his family that was the problem and Forrester’s hands were tied until something changes.

Forrester tried talking to Kellet about other options when work called. Forrester and his team were contacted after an American couple lost contact with their surrogate. The Palmer couple didn’t have much. They thought a surrogacy in Romania would be cheaper. It was at first, but then the costs started adding up and the couple were now two hundred grand in the hole. Only it didn’t matter to them. They just wanted their baby. Their surrogate’s name was Cosmina. They met her through a surrogacy clinic. They like her during her interview. They chose her to be their surrogate and it was a gestational surrogacy. The baby was biologically the Palmer’s child.

Meaning the baby was American. An American child had been abducted and it was up to the team to locate the surrogate. They met with some resistance from Romanian cops. It turns out it doesn’t matter if the baby isn’t biologically the carrier’s. The surrogate still has the legal right to keep the baby if she wants to. It was Romanian law. But the team had the Romanian government on their side. Everyone wanted to turn an American baby over to their actual parents and so the team went looking for Cosmina. They checked her apartment. The apartment looked far too swanky for a supposed country girl.

There were other things that didn’t add up as well. Cosmina has asthma. Her pump at her apartment was empty and so they checked to see if she filled in prescription elsewhere. They found she was waiting on it at a pharmacy near the train station. The team went there. They eventually found Cosmina and she was no longer pregnant. She’s claiming she miscarried. She said that she went into labor on her own and that the baby was born dead. She said she felt so ashamed that she dumped the baby in the river as part of a cleansing ritual. But Cosmina claimed she didn’t tell anyone else because she was so ashamed of the miscarriage. And the team weren’t buying that.

Nothing about Cosmina’s story made sense. The team tried to fact-check it and it was impossible. They also couldn’t find a body because the river could have swept any remains away. But what they did have was from Cosmina’s surrogate friend. The friend has been down the surrogate route six times. She knows what expect. She didn’t think Cosmina did. Cosmina also called her about what to use on a baby’s flaky skin and so the baby survived. Or else there wouldn’t be a reason to give the baby smooth skin. Then there was the fact that Cosmina was in contact with another couple. She was in contact with Howard Greyson and his wife.

The Greysons were wealthy. They’ve also been on the record about their fertility issues and so it seems they’ve turned to buying a baby. The team knew that the baby girl was born and that she didn’t belong to the Greysons. If she did, they wouldn’t have covered up their presence in Romania or have fled their hotel. The team went to the hotel and they found the baby cream. They didn’t find the Greysons. They had to track down the Greysons using the GPS in their car. The team also learned that the woman who runs the surrogacy clinic was in on it. She was being given seven hundred thousand to make it all look legitimate.

Here’s what happened: Cosmina had a healthy baby girl. She was fine with giving the baby away. She just wanted to be paid for it and she was so by the Greysons. The Greysons have no legal attachment to the baby. The woman who ran the clinic had some documents that Cosmina signed that handed over the custody of her baby to the Greysons. They were hoping to make their fraud/kidnapping look legal. But it wasn’t. Forrester was able to convince the local Romanian police to finally get on board and they all together managed to find the Greysons before they could fly out of the country with the baby.

The Greysons couldn’t legally adopt because Howard has a record. They then tried to steal a baby and were caught. The Greysons quickly lawyered up. Cosmina hadn’t. The team was able to extract a confession from Cosmina and she confirmed that the baby was biologically the Palmers. Cosmina’s situation was a trial run for the clinic. They were hoping to make double deals in the future and Cosmina’s confession stopped that from happening.

The baby was later handed over to the Palmers and they were just so happy that they didn’t care they were in debt. Afterwards, the team went out for drinks to celebrate. Forrester didn’t join them. He continued trying to help Zsolt and so now he was spying on the mob that was controlling the family.