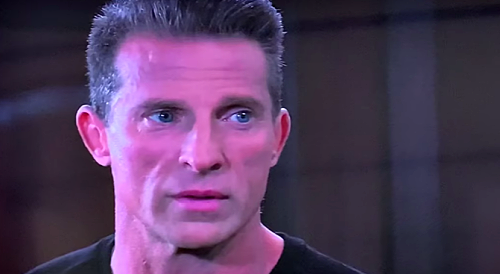 General Hospital (GH) spoilers tease that Victor Cassadine (Charles Shaughnessy) could be holding Jason Morgan (Steve Burton) captive along with Luke Spencer (Anthony Geary) and Holly Sutton (Emma Samms). An umbrella story could reveal another faked death – that is if GH ultimately intends to bring Jason back down the road.

There have been some signs that maybe Jason could indeed make a comeback at some point.

Although Carly clearly misses Jason, she’s perhaps never been about to “feel” Jason is dead in the way that she should.

There may always be part of Carly that clings to the hope of Jason’s survival.

Of course, we all know Jason is practically indestructible anyway! That tunnel collapse may not have been enough to take Jason out for good.

Jason’s one of those characters who has a way of coming back time and time again – no matter how bleak things may seem.

There are obviously no plans to recast, so Steve Burton could easily step back in the role if he ends up complying with vaccination rules, or the rules change, and works out a new deal.

There was no heartbeat or any other sign of life detected in the tunnel, but what if Jason had already been whisked out some hidden exit by then? Without a body, it’d be an easy death to undo.

We’ve also got Victor as the perfect baddie to order Jason held hostage.

Jason had no intention of letting anyone or anything manipulate his brother.

Jason was looking out for Drew Cain (Cameron Mathison) and could’ve hindered what came next for Victor.

Victor is the kind of guy who certainly could’ve still had people monitoring things and taking action for him back on Cassadine Island.

Even a captured Victor has resources and leaves nothing left to chance.

A hostage Luke works just as well as a dead one for Victor.

We know a dramatic umbrella story is getting ready to kick off, so wouldn’t it be something if it led to at least a three-person rescue?

What if Jason also ends up being found with Luke and Holly?

General Hospital spoilers say this mystery will lead to some jaw-dropping revelations, so stay tuned to see if one of them might involve Jason being alive and well!

CDL’s where you want to be for exciting General Hospital spoilers, updates and news, so stop by again soon.