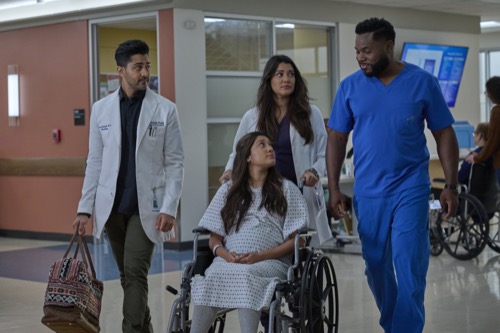 Tonight on FOX their new medical drama The Resident airs with an all-new Tuesday, October 4, 2022, episode and we have your The Resident recap below. In tonight’s The Resident season 6 episode 3, “One Bullet”  as per the FOX synopsis, “When a gunshot victim comes into the ER, his injuries prove to be so catastrophic throughout his body that multiple doctors need to jump on the case. Meanwhile, Ian is faced with a mandatory drug test and Padma prepares for her C-section.”

Tonight’s The Resident episode begins with Leela who is trying to get her sister, Padma ready to go to the hospital because her planned c-section is at 9:00 am. Leela looks over at Padma’s computer and sees her writing her last will & testament. Leela closes the computer and tells her she is not going to die. Devon walks in and asks if they are ready to go. Padma tells her sister that if something unexpected happens today, she wants her to promise to take off her twins.

Conrad and Cade were on an amputation call when they hear shots fired. They take off on foot and find a guy who has been shot in the abdomen. Cade goes to grab her car, he doesn’t have much time, Conrad has to treat him on the way. Cade calls into triage at Yates and they are turned away. Conrad explains that the guy is bleeding out and they hang up on Cade.

Elsewhere, Ian grabs for some bills and downs them with some water, and Padma is being wheeled into the hospital, Leela, Devon, and AJ are there giving her encouraging words. They hook her up to a machine and the babies sold good, strong heartbeats.

Cade and Conrad arrive at Chastain, Ian and nurse Ellen are there to assist and get the guy inside. They don’t know the guy’s name so they nickname him Eucalyptus. The guy has an old scar from a previous gunshot wound. They gave him a chance but he needs an OR.

Leela is needed for emergency surgery, Devon tells her to go, and he will stay with Padma.

Conrad tells Kit what happened when they tried to call Yates.

Eucalyptus is in surgery. Meanwhile, Devon gets a message that the c-section is delayed an hour, and there is a backup in the OR.

Eucalyptus’ test realists have come in, the bullet is close to his spinal cord.

Star are lining up for their staff drug test when Ian walks by and makes a joke about it. Cade was in the line-up, she goes to Conrad and asks if this is his fault. He says he went to Kit and said he suspected a member of the staff could be using, but he didn’t say who.

Cade is really upset with Conrad. Cade goes into the ICU to see Eucalyptus, he needs real-time monitoring and delays, Kit overhears and can’t believe how much money this is going to cost for one patient.

Leela, AJ, and Devon are back with Padma, the OR schedule has opened up, and she is back on the board.

Eucalyptus’ pressure just tanked, they pause the dialysis, he is bleeding internally, and need to get him back in the OR.

Padma gets bumped again, Devon tries to comfort her as Leela and AJ run to the OR. Leela tells AJ that she is worried about Padma, he says he is too.

Padma is in pain, in her lower abdomen, and the fetal heart rates are dropping. Padma is bleeding from her uterus, she needs an OR right away and there are none available. Devon runs to get an OR, they cancel someone else’s surgery, Padma is going into shock, they need to hurry.

In the OR, baby number one is out, and baby number two. Padma is bleeding heavily, they need blood and there is none left, they used it for the gunshot would. Leela finds out about Padma and runs to help. AJ is doing his best to save Eucalyptus. Leela freezes and Devon reminds her that she has done this a hundred times. Leela ties up the bleed just in time. AJ leaves Eucalyptus to another doctor and runs to check on Padma. The babies are in the NICU, AJ heads there. Two healthy boys, Ian is there and he congratulates AJ and hands him the babies. AJ is overwhelmed.

Kit is looking at the total cost for Eucalyptus’ care and it is over $430k. She calls Ian into her office and she tells him that he tested positive, he says yes, he took something for his back, and he should have said something before the test. She says ok, but she cannot have him operate with a positive test result, she can only let him back when he is negative.

Cade nudges Padma to wake her up. She turns to Leela who tells her that the babies are fine. She will have a long recovery, but she is going to be ok.

Ian asks Cade for a chat, he tells her that he tested positive, and that he has been taking pills for his back. He has to test again in a week and says he should be negative by then.

Billie tells Kit that Eucalyptus will never walk again because the bullet touched his spinal cord.

Conrad asks Cade if they are good, and she tells him about her father. She says it is possible they were pills for his back, but. He tells her to come home with him, but she says she needs to be alone, maybe tomorrow. She hugs him.

It took 100 health care workers to save Eucalyptus’ life from getting shot with one bullet.