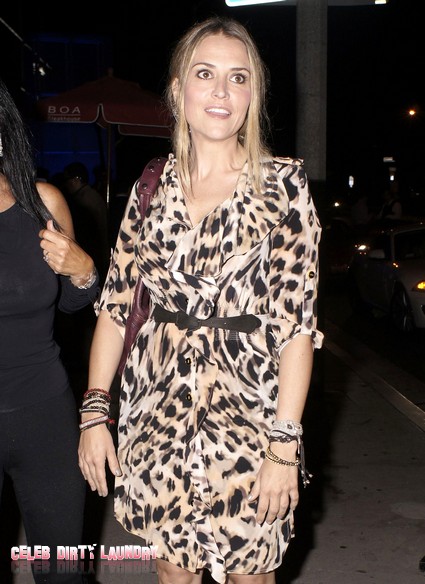 Brooke Mueller really likes to get wild and violent on a night out – and take lots and lots of cocaine – and that is why Charlie Sheen‘s ex-wife has been charged with intent to distribute drugs and assault. Just minutes before Brooke was arrested but after she had already committed the alleged assault on someone at a nearby nightclub she can be seen partying in the video below.

TMZ managed to get the revealing video:  Minutes after Brooke Mueller allegedly assaulted someone Friday night, she sashayed her ass into an Aspen nightclub like nothing just happened — and TMZ has the hilarious security cam footage.  TMZ broke the story … Brooke was arrested Friday night outside Aspen’s Escobar nightclub on suspicion of felony cocaine possession. She was also booked for third degree assault after allegedly attacking someone at a different nightclub nearby.

But right before all that happened, Brooke DANCED HER FACE OFF.   There’s no sound — but you can totally make out Brooke doing her thing … twirling around, drink in hand, bumping into other dancers. Moments later, cops show up and drag her outside.

Brooke, the mother of Charlie’s twins, Bob and Max was arrested in Aspen, Colorado on Friday after being found in possession of a large amount of cocaine.

A spokesman for the City of Aspen and Pitkin County Police said: “Officers with the Aspen Police Department were on a routine walk through when they contacted a woman who reported an assault which had taken place. The woman identified Brooke Mueller as the aggressor.

“Mueller was arrested and charged with assault in the third degree and possession of cocaine with intent to distribute.”

If she is found guilty in the drug charge Brooke could face up to six years in prison.

A police spokesman added: “When someone is found to have more than a certain amount of the drug they are charged with intent to distribute.”

Brooke has now been released after posting her $11,000 but must return for a District Court hearing on December 19th, 2011.