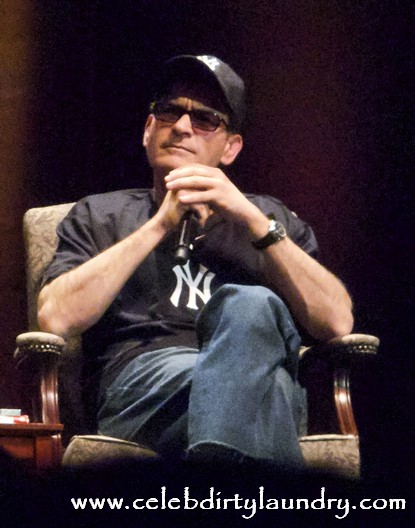 After the performance of My Violent Torpedo of Truth/Defeat Is Not an Option in Boston Tuesday night Charlie Sheen told Boston’s Sports Hub 98.5 WBZ-FM that “there’s been discussions” for him to return to Two and a Half Men.

“I was asked not to divulge anything,” Charlie said of his top-secret talks with the decision-makers at CBS – that means people like boss Les Moonves and the show’s executive producer and creator, Chuck Lorre.

Charlie added “Had they told me at the end of Season 8 that that behavior wasn’t going to be cool, I would have adjusted it.”

This is a great admission coming from Charlie who by now must realize that his future is NOT in stand up comedy.

What has helped with the reconciliation process is that since being fired from the hit show, Charlie has stuck with his 20-city tour.  Although his show has received mixed reviews at best the fact is that he soldiers on, appears on schedule, does not get into trouble, and does the job.  This can not fail to make an impression on the honchos at CBS.  They have to be saying to themselves something like: ‘if Charlie can do this stupid tour, he can do Two and a Half Men, and we could be making lots of money!’