Canadians: Hide Your Daughters, Lock Your Doors – Charlie Sheen Is In Town 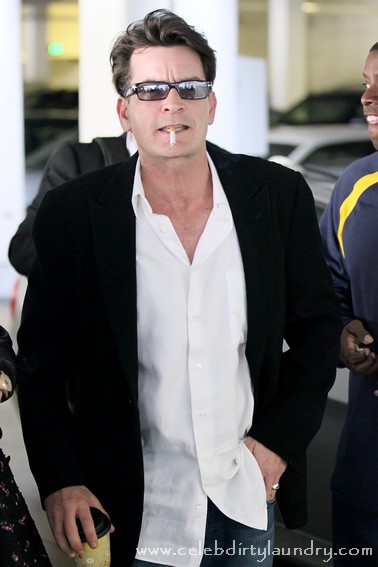 The embattled Two and a Half Men star is, no doubt, hoping for a better reaction from his neighbors to the north – upon landing, he mingled with fans at the airport, signed autographs and posed for photos.

So far Charlie has gotten mixed reviews – at best – in the US for his My Violent Torpedo of Truth/Defeat Is Not an Option tour.  After bombing during his first appearance in Detroit, the actor fared somewhat better in a couple of later performances, but his last gig in Boston didn’t go as smoothly as he had hoped with fans streaming out the exits while Charlie was still on stage.  Overall the tour has been a critical and popular failure.

When we heard that Charlie was coming to our native land we immediately prepared and attempted to buy tickets for the first show – what legitimate blogger wouldn’t?  In any case, within 3 minutes of going on sale the regular tickets were sold out!  All that remained were the special $750 dollar/meet Charlie backstage tickets – we passed… .  A second show was put on because the first sold out in 2.6 seconds – but by then he’d played and bombed in Detroit – so we decided to give the whole Torpedo a miss.