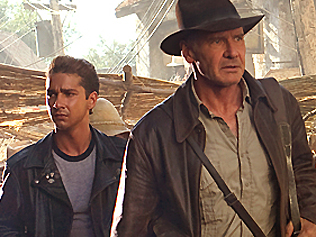 Shia LaBeouf is irate that Harrison Ford had the gall to criticize him in public.  The ‘Transformers’ star is just about ready to murder Ford for calling him a ‘f**king idiot.’

LaBeouf, who was Ford’s costar in ‘Indiana Jones and the Kingdom of the Crystal Skull,’ had spoken poorly of the movie and Harrison called him on the carpet for speaking ill of his own production.  While one source said “Shia worships Harrison and respects his views but he’s not happy at being scolded in public,” we can be sure that the two won’t be working together any time soon.

The source went on to say that “Shia is looking to clear the air with Harrison before they work on another Indy movie together because there is clearly some lingering bad feeling between them.”

In fact it is refreshing that LaBeouf had the balls to speak truthfully about ‘Indiana Jones and the Kingdom of the Crystal Skull’.   We saw the film and is was SOOO bad – it was torture to have to sit through it.   Perhaps Harrison should focus on making sure his movies are praiseworthy rather than heaping criticism on Shia for telling the truth.