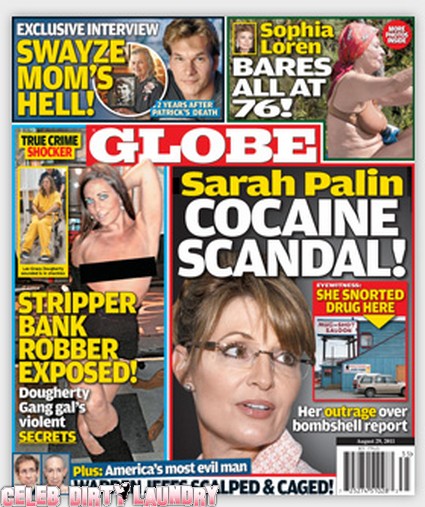 In the August 29th issue of Globe Magazine their cover story is ‘Sarah Palin’ Cocaine Scandal.’  Blazoned accross the cover ‘Eyewitness – She Snorted Drugs Here – Here outrage over bombshell report.’  With speculation mounting whether Sarah will make a bid for the presidency of the United States what a perfect time for such a rumor.  They claim to have an eyewitness and they better have because I can see a lawsuit in the magazine’s future.

Globe claims: Possible presidential candidate Sarah Palin is in a fury over charges she snorted cocaine in an Alaskan bar, and that she covered-up a close family member’s serious drug problem. You’ll find the entire shocking story – including the surprising identity of the family member – in this week’s GLOBE.

Not only is the magazine claiming that Sarah has has cocaine problem but they are also claiming that another family member does.    If you have to find out more pick up the current copy of the magazine.  I think this is just more baseless speculation to sell magazines.  What about you, what do you think?

Meanwhile as presidential hopefuls announce their candidacy for the presidency of the United States many are waiting for Sarah to announce her intention to run.  However, trying to predict what Sarah Palin will do is impossible!