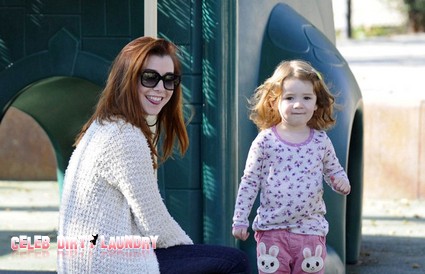 Alyson Hannigan, who plays the loveable Lily on FOX’s How I Met Your Mother has confirmed via Twitter that she is indeed preggers. The American Pie alum and hubby Alexis Denisof, of Buffy the Vampire Slayer fame, are thrilled to be adding to their family. The couple are already parents to two year old cutie, Satyana.

Alyson excitedly tweeted to her fans today, “Yes I am pregnant! This time it is NOT a food baby. We are beyond happy!” As luck would have it, Alyson’s sitcom character Lily is pregnant too so producers will be relieved to not have to hide it during filming. The show has masterfully worked around Alyson and co-star Cobie Smulder’s (Robin’s) pregnancies in the past. Talk about life imitating art!

Executive Producer, Craig Thomas told E! online, “Everyone at How I Met Your Mother is thrilled for Aly and we’d especially like to thank her for timing this perfectly to Lily’s pregnancy on the show!”

So how does this working mom balance her TV career and motherhood? Alyson’s daughter, Satyana is apparently a fixture on the How I Met Your Mother set. Hannigan told OK Magazine, “I haven’t spent one night away from her yet, so I feel like the first night away is either going to be when she spends the night at a friend’s or goes to college. Whichever comes first.”

In other Mother news, TVLine released a series spoiler today saying that when the show returns (January 2), Barney and Ted will finally fulfill their dream of opening their dream bar, Puzzles, inside of Ted and Robyn’s apartment.