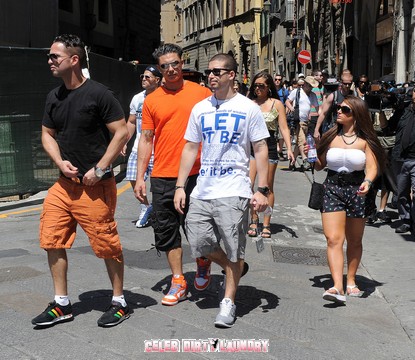 MTV knows a good thing when they see it!  The Jersey Shore cast who is now filming their forth season in Florence Italy decided they wanted more $$$$ to do Season 5 of Jersey Shore.  The cast put the pressure on the show to get what they wanted before they would agree to sign their contracts.  MTV is not stupid the show is wildly popular for some inexplicable reason and after a lot of haggling  they gave the Pauly, Sitch, Ronnie, Vinny, Sammi, JWoww, Deena and Snooki a pay rise.

TMZ has more: We’re told MTV originally planned to shoot the new season under the terms of the Season 4 contracts — but lawyers for the cast refused … so MTV drew up new papers.  We’re told the majority of the cast has already re-signed for a bump in salary — not a HUGE raise, but still significant — and the rest will sign this week.

They leave Italy June 23, 2011 and I am sure the Italians are holding a huge celebration and hope they never come back!  Florence and Italians were not happy to have the cast in their city because of their antics.  Filming of Season 5 of Jersey Shore will start in New Jersey June 26, 2011.