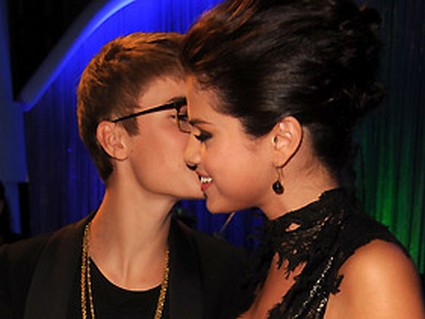 Justin Bieber and Selena Gomez are clearly well advanced on the physical side of their relationship.  The cutest couple in the world are definitely not going to be doing a high school or college tour touting sexual abstinence as did the phony teen mom Bristol Palin.

Selena was a co-host at the pre-show at the MTV Video Music Awards and Justin just could keep his hands and lips of off his little princess. Of course there are worse fates for an aspiring young starlet than being the object of the affectionate attentions of the world’s most adored teen star.

Selena interviewed her boyfriend in the arrivals hall at the awards ceremony. While Selena tried to act professionally, Justin found it hard to keep a straight face and gave his girl an unexpected as she signed off from their interview.

A giggling Miss Gomez was a little taken aback as her 17-year-old beau continued to kiss her and nuzzle her neck in front of the live cameras and had to forcefully remove herself from his clutches.

‘You’re up for Best Male Video,’ Gomez asked her popstar boyfriend. ‘I want to know – you’re up against Eminem and Bruno Mars, do you feel a little nervous at all?’

‘You know, I’m just excited to be in the category with such amazing people,’ Bieber answered. ‘I’m just happy to be here.   Selena continued: ‘Rumoured to be performing is Jay-Z and Kanye [West], and I know you like them both. Are you excited to see them perform?’  ‘Very excited,’ Bieber replied. ‘I heard that it was kind of a last minute thing, but I’m really excited.’

Bieber also admitted he was looking forward to Beyonce’s performance just as much.   As the interview ended Selena told Justin: ‘Thank you so much. Thank you for hanging out, babe.’

Was Justin simply displaying his great love and affection for Selena or was he also saying ‘I am Justin Bieber and I can do whatever I want to’ – we say a bit of both.