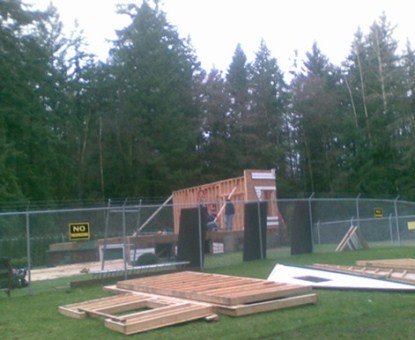 The filming of the Twilight Saga’s: Breaking Dawn was moved from Vancouver to Baton Rogue in November.  A few people I know who have previously worked on the Twilight movie set were very upset about the move.  Good news now – some of the scenes are going to be shot in Vancouver, Canada this February and they have started to put up the sets.  They are currently setting up Kristen Stewart’s Swan house where Bella Swan lives with her father Charlie.  Kristen Stewart, will likely shoot numerous scenes at the Swan house.

Since Bella lives in the house before she marries Edward Cullen (Robert Pattinson) some of the scenes will be in the beginning of the movie.  Meanwhile our insider who works on the Twilight sets gave us the scoop about Kristen.  He said Kristen is extremely professional and great to work with.   Good news for twi-hards our insider assures us there is no doubt that Kristen and Robert Pattinson are a couple and all is good with them.    Stop by in the next couple of weeks for more insider info from the set.