Lindsay Lohan And Her Nipples Show Up For Community Service 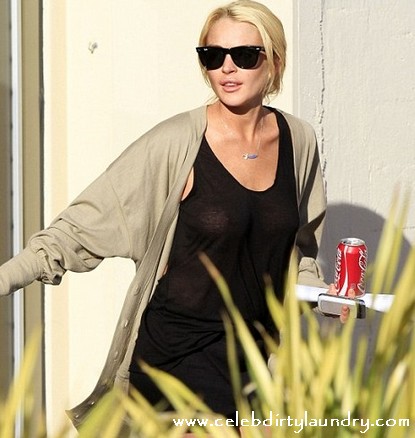 Lindsay Lohan turned up for her induction to the community service aspect of her sentence in LA wearing a sheer black dress and no bra.  Accompanied by her lawyer Shawn Chapman Holley, the actress was clearly intent on making an impression.

And she made two very noticeable marks up top as she left the Downtown Women’s Center, with the sun rendering her clothing semi-transparent.  The Mean Girls star has been ordered to complete 480 hours of community service, which she’s set to begin later this week.

She was given the punishment for a probation violation relating to the theft of a necklace from a plush jewellery shop.  Lindsay was also ordered to serve 120 hours behind bars.

The 24-year-old denies stealing the necklace in Venice, California, claiming she had forgotten she was wearing it.  Her upcoming prison term will be her fourth relating to a 2007 drink-driving case.