Lindsay Lohan Falls On Her Butt After Leaving NYC Bar! 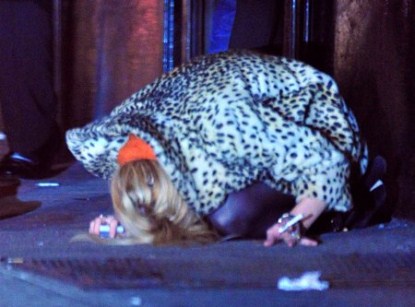 Of course Lindsay Lohan says she was neither drunk nor even drinking when she landed on the sidewalk after leaving a bar in NYC.  The legally challenged Lindsay said: “I was NOT drinking, nor do I drink!”

Lindsay is on the defensive after being photographed going down hard outside the Motor City Bar on Wednesday.  Naturally people thought she was drunk since seeing Lindsay Lohan falling down after leaving a bar could indicate that she was not adhering to her post Betty Post sobriety plan.

But according to Lindsay that’s not the case.   “I was with my brother, sister and friends.  I was making a joke.  They’re trying to make something out of nothing.”  Lindsay adds, “Just because I’m out doesn’t mean I’m drinking.”

Of course not, but falling down outside a bar certainly could give that impression.  Does Lindsay believe that stunts such as this one are the best way for her to deal with her impending trial and possible incarceration for violating her conditions of probation?