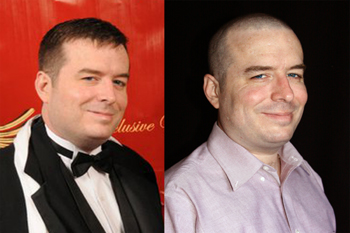 Celeb Dirty Laundry’s own Shannon Rose is not only a Hollywood Reporter but a manager for “The Cuban Assassin” Fidel Sierra in Florida Underground Wrestling.  As manager of Sierra, Rose continues his deep roots in professional wrestling.

Banking on Sierra to win, Sierra eventually pins Santee in the ring, but as soon as his hand was raised in victory, Florida Underground Wrestling’s Commissioner Dontay Brown decides to restart the match.

Santee took a few hits from Sierra until he quickly reversed the tides of the match and pinned Sierra in the ring, retaining the title and forcing Rose to lose his hair.

Brown shaved “Mr. Hollywood” right in the middle of the ring in front of the entire crowd.

“I am off to Hollywood to rediscover myself… but mark my words this is not the end of Mr. Hollywood” Rose states.