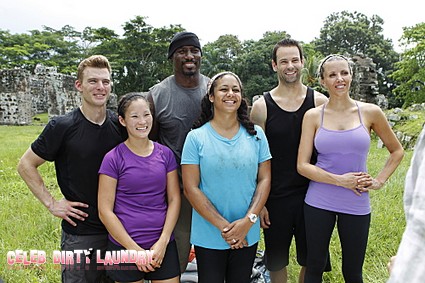 After 11 weeks of racing around the world the remaining contestants are headed towards the finish line.  Tonight is the finale of 19th season of CBS’ popular reality show ‘The Amazing Race’ and it is called “Go Out and Get It Done.”  Three teams are left Ernie and Cindy, Amani and Marcus and Jeremy and Sandy as they race to the finish line tonight.  Last week Snowboarders Andy and Tommy – got eliminated in Panama.   They were the leaders for most of the season but after a big mistake they ended up being the last to arrive at the pit stop.  If you missed last week’s episode you can read our official recap here!

Tonight the final three teams depart from the Panama Viejo in Panama City, Panama and return to the United States to compete on the grand final of The Amazing Race 19. Who are you rooting for to win the $1 million dollar prize?  Sound out in the comments below!

Synopsis: After racing through 4 continents, 20 cities and nearly 40,000 miles, the final three teams race to Atlanta, Ga., where a smooth landing evades one team as their competition soars. In the end, the winning team is crowned and awarded the $1 million dollar prize, on the season finale of The Amazing Race Sunday, Dec. 11 (8:00- 9:00 PM, ET/PT) on the CBS Television Network. Phil Keoghan is the host.

Our sister site Fit Fab Celeb is covering the show tonight with all the up-to-the-minute results.  So head over to visit her and make sure to refresh often!  Enjoy the recap! The Amazing Race Season 19 finale recap!

Check out the video below of this season’s winner of The Amazing Race!