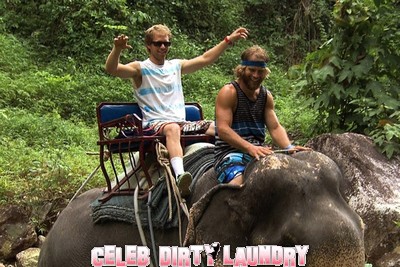 Tonight is the fifth episode of Season 19 of The Amazing Race called ‘I Feel Like I’m In The Circus.’  The eight remaining teams depart from the floating village of Koh Panyi near Phuket, Thailand and continue on the fifth leg of The Amazing Race, with one team facing a Speed Bump in the next leg.   Last week the last team to arrive was Liz & Marie but was their lucky day because it was a non-elimination round.  If you missed last week’s episode read our official recap here!

Sometimes you just get lucky on The Amazing Race and luckily for twins Liz and Marie, they got lucky in the last episode. It seams the two former former beach lifeguards never learned how to set up a beach umbrella in the wind. The twins cried and fought for hours as they were prepared to get eliminated, but this was a non-elimination leg, so, the twins race again this week but they will have to face a speed bump.

At the start of the fifth leg, the teams get $186.00 for this leg of the race, Andy and Tommy who arrived first last time at the put stop, get to leave first. The boys have the adventure of riding local transportation, an elephant through some tricky terrain to retrieve their next clue. The roadblock is to jump in the water and retrieve the clue, they find it by following the music of a flute player.

The next road block is to head to a local shop to dismantle a ‘spirit house’ Thai shrine and deliver the pieces to a Temple and assemble the pieces in their exact order on the holy ground, they key here is to remember what it looked like before it was dismantled. The challenge is tougher than it appears and even Andy and Tommy have to head back to the original shop and draw it on a piece of paper to help with re-building it. The rest of the teams take notes or photos, meanwhile Laurence tells Zak not to, they can do it without. Zak tries to assemble it and realizes he can’t do it, his father gets irritated and can’t believe they have to go back to look at how it was assembled, what an idiot!

Andy and Tommy are still in the lead and after assembling their spirit house, they receive their next clue, travel 550 miles by bus to the city of Bancock at Banckok Noi Canal to feed the fish.

Liz and Marie arrive at their speed bump, they have to wash up after their local transport – the elephants!

On the second try, Zac manages to finish reassembling the shrine. Meanwhile, Ernie tells Cindy to hurry up and dismantle the shrine, forget about remembering where things go.

Some of the teams are on their way to Bancock, although Zac and Laurence make a fatal mistake and take a first class bus. Back at the temple, Cindy and Ernie are finally finished assembling the shrine and on their way to the bus terminal; Bill and Cathi are just behind them. They arrive at the bus terminal and don’t pay attention, they get on a first class bus. Zac and Laurence catch a later bus, but they are on the right one. Liz and Marie run out of money and can’t pay their cab driver while the bus that they should be on, leaves without them.   Luckily, the cab driver accepted all that they had and drove them to the bus.

On this leg of the race, Cindy and Ernie are the first to arrive to feed the fish. After feeding the fish the teams are headed to the Pit Stop. Amani and Marcus are the first team to arrive and they win a trip for two to Bali.

Liz and Marie have no money, they feed the fish and head out walking but after a long walk they ask a taxi drive to take them and he says yes.

Andy and Tommy make a mistake that causes them to be at the back of the pack. Liz and Marie arrive to feed the fish and again have to ask for a free cab ride, another cab drive gives it to them.   At the Pit Stop, Phil explains to Zac and Laurence that they could have stayed on the first class bus, the first class only applies to air travel. (I was wondering why Cindy and Ernie didn’t get a penalty).

The last team to arrive after a brave and valiant effort is Liza and Marie and they are eliminated!