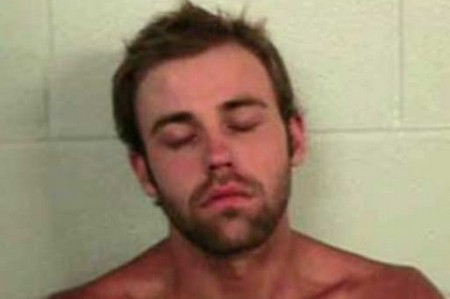 “16 & Pregnant” baby daddy Weston Gosa, who is the father of Whitney Purvis‘  baby partied a little too hard in Georgia yesterday. The 23 year old MTV star crashed his vehicle and was then placed under arrest by Floyd County officers who said he was under the influence of prescription pills.

If that isn’t bad enough Gosa was said to have Xanax and Lorcet without a prescription in his possession as well as a pipe with some kind of residue in it. Ultimately he was charged with felony possession of controlled substances, misdemeanor possession of drug-related objects, and DUI. Gosa is still in custody and appeared to be asleep or passed out in his mug shot.

Not too surprising to hear that this slacker would find himself on the wrong side of the law. When he was dumped by baby mama Whitney, she had little good to say about him. “He was gone all the time. He wouldn’t come home until 3 in the morning … I was home with the baby and he was nowhere to be found. “You definitely know when someone is cheating on you. He was just out with his friends all the time getting all messed up … I don’t want that around my kid.”

What is it with these young reality TV stars? If they are clean before MTV comes calling, they don’t seem to stay that way for long. It’s almost as if they are handed money and instantly make bad choices of what to do with that money or maybe the fame and attention is all too much to handle and they escape through drugs and alcohol. What are your thoughts on Gosa’s arrest and how he is just one in a string of stars that have been busted for pure stupidity? Let us know in the comments below.