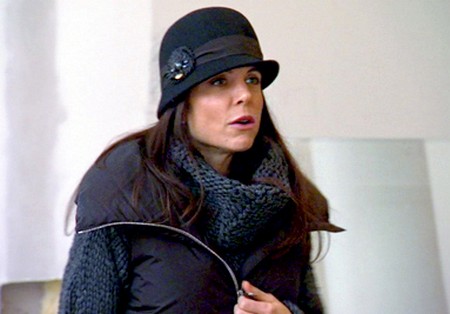 A whole new episode of Bethenny Ever After airs tonight on Bravo.  Tonight’s episode is the 14th of the third season and it is called ‘Unregrettable.’  Stand by as we live blog the episode with all the up-to-the-minute details.

If you have never watched the show it follows the life of Bethenny Frankel – a New York Times best-selling author and natural foods chef, running a successful line of Skinnygirl products.  Bethenny is a wife to her husband, Jason Hoppy, and a mother to her daughter, Bryn, and her furry first child, Cookie.

In season 3, As things increasingly shift in her world, Frankel will have to adjust to the realities of marriage, lawsuits, and life in the public eye. Keeping her head above water is one of her fortes, but even with all the indulgences of the good life, this year may prove to be harder than anything she’s experienced before.   Don’t miss the show it is great!

On tonight’s show Bethenny must once again face her past when she has dinner with Louis, one her deceased father’s dearest friends. Things heat up at dinner when she has to defend her truth about her childhood and make Louis understand she will not rewrite history.

We will be live blogging Bethenny Ever After tonight with all the up-to-the-minute details at 10PM EST so make sure to come back to this spot and watch the show with us.  Refresh often to get the most up-to-date results!

RECAP: Bethenny and hubby Jason, have been having problems for quite some time now. No reason to think that tonight’s installment will be any different. The episode opens with control freak Bethenny overseeing the design of her new apartment. It then flashes back to everything she has done in the last few years. Her speaking engagements, pregnancy, training for Skating with Celebrities- I mean, we get it. Bethenny is a cut throat business woman that multitasks better than most of the universe.

Oh and she sings to her baby in Spanish. Even THAT has to be an overachieving task. Actually, she takes Bryn to Spanish class because celebrity babies MUST be bilingual. I think it’s an unspoken rule. Anyway, there is a big segment on baby Bryn and the footage all shows an obviously softer, gentler Bethenny.

Bethenny and Jason sit down to eat with her friend Louie and hash out her non-relationship with her father. From that meal with hop to a pregnant Bethenny crying over not having parents there for her. Somehow that leads to Bethenney reading a google-esque text which claims her marriage is over.

There is a theme to this episode. The ongoing theme is that it is completely discombobulated and makes little sense. Kind of like Bethenny at her worst!

Now we hop to her waiting in the green room of the Wendy Williams show, discussing her own talk show. It is/was set for a 6 week summer run and she’s grilling her publicist on the latest info. She’s also grilling the hair and makeup staff on Wendy’s normal workday. This, quite naturally leads into a nice chunk of Bethenny’s actual interview on Wendy’s talk show! Of course, she praises Jason and ponders baby number two. She uses the whole experience as an inside learning experience, a treasure trove of info to bring to the set of her own show.

Back to the depressing, Bethenny has no real family, but she learned to be friends with her mother and she made the right choices towards her father before he died commentary. This time rather than just talking to the camera, she is hashing things out with her longtime therapist. You know the drill, running down the list of how she has improved the quality of her life, etc.

Toilet shopping? Sure, why not?! See, even they know there is a lot of crap in this episode!

The couple is five weeks from moving into their new place and they actually take a moment to thank each other for working so hard in their own special ways. This leads to a montage that shows the couple in various spats or heated disagreements. Wait. The common denominator in each scenario is that Bethenny is talking a mile a minute and flipping out. Jason also admits struggling with his pride. It’s hard to have a wife that is more financially successful than he is.

This episode is what we call “filler”. The powers that be took all the extra footage they had and patched it together until another hour of programming was born. I say we kind of forget this episode (and really, no one will remember it anyway) and look ahead to next week. It looks like Bethenny is going to drop a big surprise in Jason’s lap. Could a new baby be on the way?

Did you watch tonight? Tell us what part was most memorable for you!