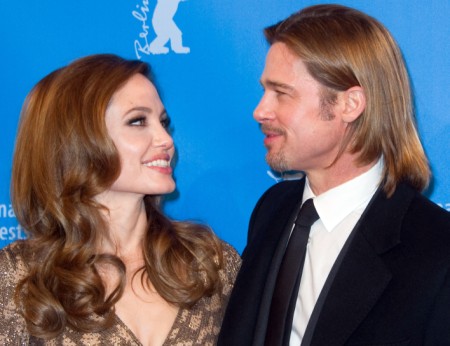 Angelina Jolie and fiance, Brad Pitt, have recently bonded over the ever delightful and equally cringe-worthy karaoke machine. Hey you two, 2001 called and it wants its favorite party game back.

The UK Sun reports the mega stars hired a theater company to visit their new rental mansion in Surrey to teach karaoke sessions. Apparently, what turned out as a way to encourage their six kids’ musical talents, turned into a fun way for Brad to annoy the hell out of Angelina. A source said, “Brad likes belting out a tune in front of the kids. Angelina thought it would be a fun way for the kids to practice their singing and the theatre group have really helped. They’ve only been round a couple of times but Brad and Ange hope to make it a regular thing during their stay in the UK.”

The couple will be in England for the next two years thanks to their work schedules leaving many to speculate they will get married there. Perhaps the kids could sing at the wedding? The source revealed the children choose to sing pop songs while Brad and Angie opt for older, classic tunes. Oh man, to be a fly on the wall. Let’s play guess the song! What do you think Brad and Angie would pick to sing? Brad’s a Missouri boy but for some reason I see him wailing to Boston’s It’s More Than A Feeling. Angie’s a much easier guess. I’ve got her pegged as an I Want To Be Sedated, Ramones kind of girl.

And this family has cheesy written all over it so you know they go all Sister Sledge at the end of the night and finish with We Are Family.

Any other good guesses?