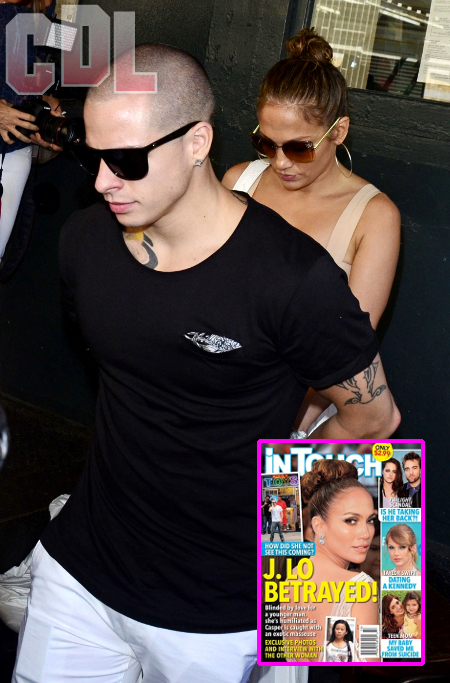 Casper Smart might have Jennifer Lopez on his arm but that’s not enough to keep him from frequenting exotic massage parlors — and betraying her with an exotic masseuse! He is such a regular at an 8th Avenue establishment that the locals refer to J-Lo as his “sugar mama.” This month alone, Casper has been seen visiting an upstairs, appointment-only massage parlor in Hell’s Kitchen. In Touch Weekly magazine has more info on Casper’s hobby,

“Bibi, a massage worker at the parlor, who says she is 31 and a native of Korea confirms to In Touch Weekly, “I saw Jennifer’s boyfriend,” adding that Casper was “in a big hurry” during his visit, which lasted fewer than 10 minutes. “He is a nice man. He has strong muscles.” Bibi’s claims are supported by multiple sources — including Don Jayasinha, an employee at the gay peep show downstairs from the massage parlor, who says Casper is a familiar face in the building. “Casper has gone to the exotic massage parlor twice this month,” he tells In Touch.

Casper, of course, denied the claims via his rep. He claimed that he was indeed cruising 8th Avenue, but it was to get a tattoo that says “hard love”, not a special massage. The only problem with that excuse is the fact that Casper was photographed with that tattoo back in May so he’s not exactly being honest there. Pick up the latest issue of In Touch to read this entire cover story. This story arrives around the same time as the Casper Smart Gay story we revealed yesterday.

Do you think that Casper is just using J. Lo for her money and the perks that come along with being associated with such a big star? Tell us your thoughts in the comments below!