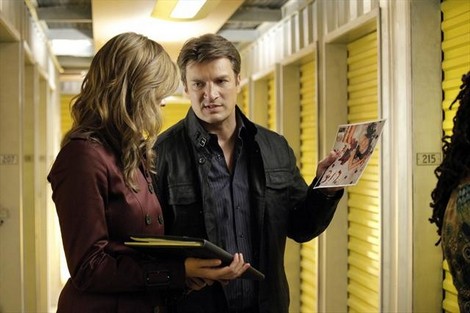 Tonight on ABC’s detective/mystery series CASTLE returns with its fifth season premiere.  When we left off season 4 Richard Castle and Kate Beckett finally gave into their feelings in the season finale.  Castle came clean and admitted how he really felt about Beckett.  He said, ” “I think you are the most remarkable, maddening, challenging, frustrating person I’ve ever met. And I love you, Kate.” In Season 5 we will get to see how the two will deal with change in their relationship.  Did you miss last year’s season finale?  If you did you can read our full and detailed recap here to catch up!

On tonight’s show after four seasons of “will they” or “won’t they,” Richard Castle and Kate Beckett finally gave in to their feelings for each other in the much anticipated Season 4 finale. Season 5 picks up on the proverbial morning after, with Castle and Beckett facing new questions — Was this a one-time fling, or are they now a couple? But before they find the answers, they must take on the forces responsible for Beckett’s mother’s murder that now threaten Kate Beckett’s life.

I find that this quirky duo is one of the best set of characters on TV right now, and it will be interesting to see where their relationship heads. We hope it doesn’t head down the drain, but we’d all be delusional to think that this relationship won’t come across at least a few bouts of heavy NYC traffic.

If you have not watched the show Castle and Beckett have one of those wonderful relationships that is filled with tension and, just like the cases they solve together, mystery. At first, when Richard Castle first met Beckett, they instantly clashed. Beckett, a by-the-book cop with years of detective work beneath her belt, is often time challenged by the free-thinking, creative mind of Richard Castle, who isn’t afraid to think outside the box — and think like a murderer.

Tonight’s premiere is going to be very interesting to see how Beckett and Castle are still together,  you won’t want to miss it. So be sure to tune in for our live coverage of ABC’s Castle tonight at 10PM EST!  While you wait for our recap, hit the comments and let us know how excited you are about the new season of Castle.

Tonight’s episode: Castle wakes up from a dream, to find Becket walking in, wearing his shirt and two cups of coffee. The two seem so happy together, Castle asks Becket if she is on board with “this”, them and she says yes. Becket tells Castle she has the day off because she quit her job, the two decide to get back into bed when his mother arrives. He tells Becket to get in the closet and hide and when she does, he sees  her bra on the floor and scoots it away with his foot. Castle tells his mom he would feel more comfortable talking with his clothes on, so she leaves the room and he gets dressed. When Castle goes into the kitchen he finds Alexis hung over and tries to distract her and his mom so Becket can sneak out behind their backs.

Ryan tells Lanie that she needs extra people on the case, but she is not going to have Becket back.

Castle goes over to see Becket and tries to apologize, she is shocked that he is embarrassed to be seen with her. Ryan is at the door and Becket wants him to hide in the closet, but he doesn’t want to.  Ryan wants to talk to Becket about the case, he tells her that the guy who through her off the roof is still out there. He wants to show her something, the photo that Maddox took from the photo album. Castle recognizes the guy, he is the one who has been protecting Becket.

The guy who Maddox is looking for is the clue to Montgomery’s files. Becket is upset, this is supposed to be over and she isn’t even a cop anymore. Castle wants Becket to do this, they need to find Maddox. They figure out by looking at the photo that the guy in the photo is well to do, the watch he has on is very expensive.

Esposito is working on the case, he wants to find the guy who almost killed Becket. Castle is narrowing down the sales of the specific watch the guy was wearing in the photo, he wants to narrow down who this guy is before anyone else.

Castle and Becket narrow down their guy, Michael Smith, but it’s too late, Maddox found him first and he’s dead. Becket sees something burning in the fire, it’s the file.

Mr. Smith is also found and he is beaten badly, before the medics take him away he keeps saying “86” and Castle is determined that it is a clue. Becket wants to get out before the uniforms show up, Castle found it, an address where the file is probably located.

Becket finds a mailbox with Michael’s name on it, they figure out that he has an office on the fifth floor. Becket hears a noise, it’s Maddox and he has a gun, he ties the two up and leaves them in a locked room. Esposito shows up and rescues Becket and Castle, he hand Becket a gun and tells the two that Maddox’s real name is Cedric Marks.

Becket and Esposito find Maddox as he is reaching for a gun with one hand and the file with another, the file was booby trapped and a bomb goes off, bye bye Maddox, he is blown to pieces.

Ryan shows up and brings them the ultimate puzzle, hundreds of pieces of paper that were put through a shredder. They put the pieces together and find an account number, whoever owns that account killed her mother. They find out that the account was closed 19 years ago by William H Bracken, who is the current senator. Bracken was the District Attorney back in the day and got himself involved with mob for the money. Michael Smith is out of surgery and awake, Becket and Castle head to the hospital.

Becket tells Smith that they know Bracken is dirty. Michael tells her that there is no proof and he is not going to testify. He owed Montgomery and protected her, but he doesn’t owe her anything. Smith thinks his best bet is to disappear and suggest that Becket do the same thing. Smith wants none of it, he tells her that he is tired and asks her to leave.

Ryan calls, they have found no concrete connection to prove that Bracken is dirty. Becket sees the cop that was supposed to be protecting Smith walk out of the hospital, he was told to stand down. Becket and Castle run in the hospital and find Smith dead from an apparent heart attack. Becket has finally found the guy that killed her mother and feels helpless that she cannot do anything about it.

Becket has disappeared, Castle thinks she is gone to kill senator Bracken and tells Esposito and Ryan. Becket passes beside Bracken and puts a cell phone in his pocket, he answers it when it rings and it’s her on the phone. She tells him that she is watching him, he is not interested in playing games, she tells him that he better do what she says or she will release some information that could incriminate him.

Becket is alone with Bracken, he tells her that her mother’s death was a tragedy and he’s sorry for her loss. He goes on to tell her a story about when he was 14, he found his friend lying down on a mattress dead, his sister as well and his mother had hanged herself. That was the moment that he knew he wanted to help protect people, he’s done great things. Becket asks him how he can justify himself to her when her mother was stabbed in an alley because of him. He calls her a disgraced cop and he is a person that is well respected in the community. Bracken goes on to tell her that it is not who has the gun, it is who has the power, he walks away. Becket tells him that she has the file, Smith had another copy. Becket tells him the deal that he had with Smith is the deal he has with her now, anything happens to her or the people she loves and the file goes public. She ends it by telling him that she is done being afraid, she hits him and tells him it is going to leave a nasty scar and to every time he sees it, he should think of her.

Becket is back at the station, she wants to be reinstated but first she has to ride out her suspension.