Demi Moore Devastated: Daughters Have Cut Ties With Her 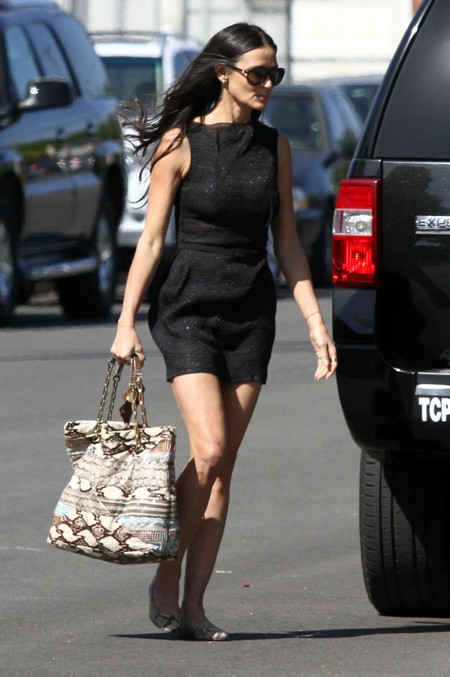 Demi Moore is still rumored to be battling addiction and backing up that notion is the fact that all three of her daughters have now cut ties with her. Apparently daughter, Tallulah’s graduation ceremony was the final straw for the fractured family. Demi had reportedly been acting exactly as she was before heading off to rehab last February and it made her daughters uneasy. Things didn’t go at all well at the graduation.

“None of the girls wanted Demi there but she turned up anyway and it was really strained. They had a huge fight afterwards and the girls decided it would be in their best interests to take a break from Demi for a while.” said a source at the time.

Flash forward just a few weeks and the girls have backed completely away. They are tired of the constant drama with their mother and feel as if they are parenting her and walking on eggshells at all times. If they say the wrong thing it could trigger a full relapse so maybe it’s better to say nothing at all. The new issue of Us Weekly has more.

“Demi is beside herself over the situation,” a source close to the family tells RadarOnline.com. “She hasn’t spoken to Scout, Rumer or Tallulah for weeks now; they won’t return any of her calls, emails or texts. The girls have cut off all contact with Demi, and she is absolutely devastated by it. She has returned to work and is trying to hold herself together, but this is a really tough time for Demi.” As previously reported, Demi’s daughters severed ties with their troubled mother after months of drama with no end in sight. “Rumer, Scout and Tallulah just don’t want to deal with the drama at the moment,” a source close to the family previously told RadarOnline.com. “Since breaking up with Ashton, Demi has been a mess. The girls were there for her through it all — the split and the rehab but now they just feel like they need a little distance. “Demi is just being very needy right now and the girls are tired of it, they want a mother not another little sister. They are all concerned that she is going to relapse and head back to rehab and they can’t deal with the stress and worry of it.”

Can you blame the girls for backing off? Situations like this are tricky and there is a very fine line between giving support and risking going down with the sinking ship. Maybe there is a lot more to this than it seems and if the star is dabbling in things again I’m sure it would send her kids running. Will Demi actually not only keep herself together, but finally stabilize? Tell us your thoughts in the comments below!