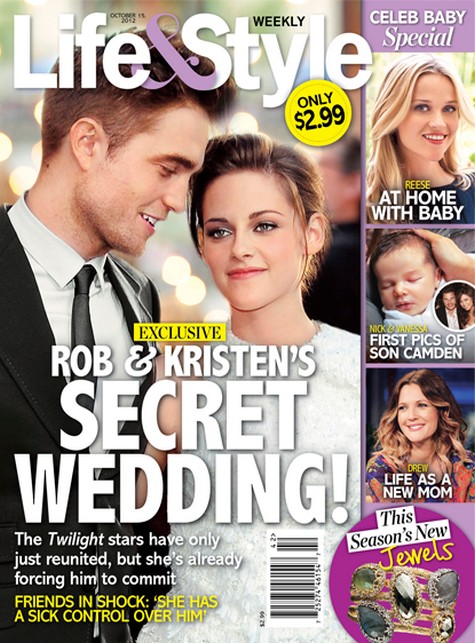 It sounds like not only is Kristen Stewart trying to angle her way back into Rob Pattinson’s life, but she also seems to want a higher place in his world now. Before she was caught publicly kissing the married Rupert Sanders, she had been very dicey on the idea of marriage or even an engagement to Rob. He supposedly thought he had found the woman of his dreams and wanted to make it official by Kristen kept him at arms length.

Last summer we all learned why she wasn’t to keen on getting hitched, probably because Rob ultimately isn’t her dream guy if she could so blatantly cheat on him in public! Anyway, the two are supposedly working on patching things up and Rob is said to be really shaky on the trust issues. Supposedly the tables have turned and now it’s Kristen that wants the engagement and quickie wedding to happen! The new issue of Life & Style has more insight,

“When they first dated, Kristen was standoffish — get didn’t want to get engaged or married,” a friend told Life & Style. “Rob did. He felt like she was everything. She was his dream woman, but she wasn’t so sure.  “Now an engagement and wedding would seal the deal between them and make Kristen very happy.  “Kristen doesn’t want to stay away from Robert for long. The cheating scandal made her realize that without Rob she just doesn’t have much. Without him she was lost,” the pal spilled. “She would absolutely want to get engaged soon, maybe even elope this winter.  Rob’s old friends are telling him not to go through with it. They feel Kristen’s calculated, immature and selfish. Once a cheater, always a cheater. They think she has ulterior motives, like she just wants to get back together with Rob to save her career,” says a pal.

Well, her career isn’t looking to great at this moment so she needs whatever help she can muster. In the last few weeks Rob has been spotted out with friends having a great time on several different occasions. Is that happiness because Kristen is back in his life, or is it because his whole life is no longer wrapped around spending every free moment with the sour puss?  I also wonder what Rob thinks of the rumors that Kristen is still texting Rupert even after he demanding she break ties with the director. I’m sure whether guilty of still lying to him or not, Kristen is still paying for all the distrust that the rumors are causing!

Will these two actually make it or do you agree with Rob’s friends and think he needs to end it for good? Tell us your thoughts below!