Robert Pattinson and Kristen Stewart ARE Back Together Again – (Photo) 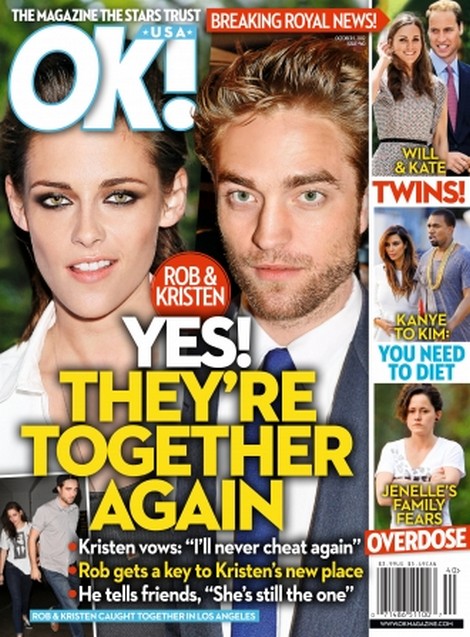 The current issue of OK! Magazine features the cover story “Robert & Kristen – They’re  Together Again!”  The magazine claims that Robert Pattinson and Kristen Stewart are once again an item.  As a matter of fact they caught up with the couple  together in Los Angeles and speculate Kristen and Rob’s secret meetings mean they’re back together.

The magazine goes on to claim Kristen has promised to Robert that she will never ever cheat again.  Hey, Robert Pattinson! Do you know that cliche saying, “Fool me once, shame on me. Fool me twice, shame on you”? Well, if you don’t know it, you’re sure as hell going to learn it, and fast.

A previous E! Online report revealed that Rob and Kristen moved back in together, but the latest information, from said channel, reports that Kristen and Rob have had two different secret meetings in two different locations.

Hit us with a plank and call us Larry! There’s still no confirmation of reconciliation, but it does sound like they’re trying to work things out between them. Are we happy? No!  OK! Magazine also confirms that Robert got a key to Kristen’s new place and he is still certain she is the one.

“Some people might look at Rob as being stupid for taking Kristen back after she cheated on him with Snow White and the Huntsman director Rupert Sanders, but Rob has really handled the situation the right way – instead of immediately bad-mouthing K-Stew during interviews, he simply moved out of their home so that he could have a little time to decide what he wants to do.”

Yes, we agree, Rob handled the situation like a true gentleman, but bad mouthing Kristen would have ruined his reputation. He kept quiet because people told him to keep quiet.  Let us know in the comments below if you think these two are back together.

Also included in this week’s magazine apparently Kanye West thinks Kim Kardashian is TOO FAT and he has demanded she go on a diet and lose 20 lbs stat!  They go on to claim that Teen Mom 2’s Jenelle Evans‘ family fears she  is on a path to destruction, while Maci Bookout begs Ryan to join her Teen Mom spin-off.

To find out about more details on why OK! thinks Robert and Kristen are back together and a whole lot more, pick up the current issue of the magazine on  now!