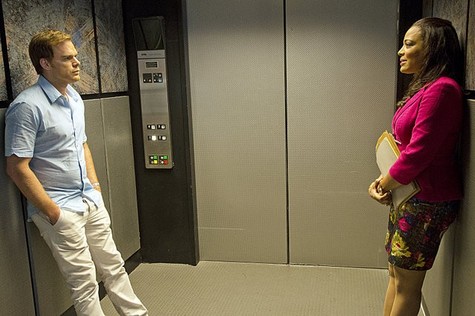 Next Sunday’s season 7 finale of our favorite serial killer show, DEXTER is aptly entitled “Surprise Motherf-ker” and we may finally see Dexter on the run for his crimes. It looks like Dexter may end up in handcuffs and perhaps will take his dear sister down with him. Harry won’t like that!   We have gotten our hands on a sneak peek and some juicy spoilers for you.

Spoiler alert: If you’re one of those people who doesn’t like spoilers, stop reading now! We have some juicy spoilers for you about the season 7 FINALE of Showtime’s “Dexter.”

From the preview below, we see Hannah in prison orange – looks like Deb finally nabbed Dexter’s honey. The two ladies share some choice words and Hannah tells her she’s a hypocrite because she knows exactly what Dexter is. She accuses Deb of making up the law as she goes along and turning a blind eye when Dexter’s involved. Hannah reassures Deb that she’s not going to rat out Dexter but that Deb will have to live with the choices she’s making.

La Guerta doesn’t have proof, but will that stop her from trying to bring Dexter in? Deb is seen telling Dexter that he needs to “fix it.” He says he will, he just doesn’t know how yet. It looks like, once again, Debra’s not going to sit back and let Dexter do it on his own. She goes to confront La Guerta and accuses her of trying to frame her brother, Dexter.

Captain La Guerta loses control and screams at Deb that Dexter’s the Bay Harbor Butcher, he has to be! With LaGuerta closing in, will Dexter try to take her out? She doesn’t fit the code, but lately, who does? Harry’s in Dexter’s head (as always) encouraging him to run and telling him not to drag Debra down with him. Dexter seems determined to protect his sister at all costs. Harry reiterates to Dex that La Guerta “doesn’t even begin” to meet the code.  Dexter justifies what he is thinking of doing by telling Harry, it is “the only option.”

It looks like James Doakes may be back, at least in Dexter’s subconscious.  Doakes died from an explosion and was identified via his ruined corpse’s dental records and died as the Bay Harbor Butcher. In the preview we see Doakes saying, “Surprise Motherf**cker.”

At the close of the preview you hear LaGuerta arresting Dexter and then see her leading him away in cuffs as she Mirandizes him. Is this a fantasy sequence or is she pushing on with her theory? These previews are sometimes misleading.

It could be good for Dexter if she arrests him falsely – it would taint any later cases against her. Will Hannah and Dex have a reunion behind bars?

Next Sunday’s episode airs at 9 pm on Showtime and is the Season 7 finale. There’s still Season 8 to come, so no matter what, I think Dexter will live to kill another day! Join us here for a live recap of the season finale as it happens!