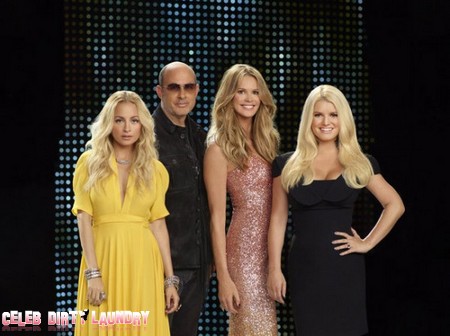 Another reality show premieres tonight on NBC,  Jessica Simpson and Nicole Richie‘s Fashion Star.  14 hopeful designers will compete to get a chance of launching their own collection and becoming the next big fashion brand.  Stand by as we live blog the show with all the up-to-the-minute results.

The show will feature host and executive producer Elle Macpherson, along with celebrity mentors Jessica Simpson, Nicole Richie and John Varvatos.  At the beginning of the show it will start with a fashion show unlike anything seen before.  The fashion show will featured musical performances, dancers and models in front of a studio audience. Every fashion show will be built around a weekly challenge that is designed to further develop and expand the designers’ brands.

The series will feature clothes designed for America to buy and has enlisted three of the world’s top retailers to help in the decision making process. Caprice Willard (Macy’s), Terron E. Schaefer (Saks Fifth Avenue) and Nicole Christie (H&M) will serve as the judges who make on-the-spot decisions as they vie for the right to purchase and exclusively carry the work of the up-and-coming designers each week.

At the end of each episode, America will have the chance to immediately purchase the winning designs showcased on the episode that week. What viewers see on TV that night will be on the streets and in stores immediately.

Each week, designers who do not sell any of their items to the buyers will be up for elimination. In addition, celebrity mentors Simpson, Richie and Varvatos will be able to save one of these designers from the chopping block.

Fashion Star premiere tonight on at 9:30 PM on NBC and we will be live blogging it with all the up-to-the-minute drama and elimination. So make sure to come back to this spot and spend the evening with us!  Refresh often to get the most current details!

Tonight’s Recap:  The show opens with Elle Macpherson’s intimate collection.  The models stomp it out across the runway and Elle Macpherson comes on stage and thanks everyone.  Elle describes how the show works.

The first contestants is Orly Shani a bartender from NYC – the challenge was to pick one signature piece that defines what they are as a designer and hers is a short skirt with a zipper on the top where they can attach different layers.  The skirts are super cute.  Edmond Newton signature piece is his bubble cocktail dress.  His signature piece is more edgy than Orly’s.

I am a fan of Orly’s skirts – lets see what the mentors think.  Nicole liked it, Jessica tells Orly her mom and her call a skirt like that a twofer and she likes it.  Jessica adores Edmunds party dress.  Nicole thought the dresses did not fit as one signature but she loved htem.

Oscar Fierro says he is a unique contestant and he is his brand.   Oscar is originally from El Salvador – designing for him is a way to escape the misery.   Nicole thinks Oscar has a great spirit but she really sees potential.  Oscar is going up against Nikki Poulos and she started her line 3 years ago.  She is very driven and very determined.

The dresses are fabulous, there are so many great designs. Oliver is in tears, he hasn’t slept in three months but he is really happy. My favorite dress was the butterfly one.

Nicole tells Oscar that she didn’t like the dresses, but she sees more in him and encourages him to do better. Jessica loved the sequined and would wear it now, John says he has seen it all before.

Jessica loved Nicki’s silks, John thinks she is on to something with the patterns and the head dresses.

Nicholas Bowes  is a former Ausrtalian model, oh yeah! He is really confident about his work. Barbara Bates is a mother of three, she quit her job to become a fashion designer. She was diagnosesd with breast cancer and survived, she lives life to the fullest.

I’m not too crazy about Barbara’s designs, the “poodle” inspired pockets do nothing for me, but loved the rest of the dress – the red one was the best. Nicholas’ jackets are ok, but all the model’s looked like they had huge hips, didn’t like any of the bottoms.

Nicole didn’t like the ruffles on the dresses hips on Barbara’s designs. Jessica found that the “poofy” pockets were over the top. John wasn’t that impressed with Nicholas’ biker jackets, neither was Jessica. Nicole didn’t like the shorts and cowboys on Nicholas’ model. Nicholas shows that he is chauvinistic, he tells the women that he doesn’t respect their decisions about men’s fashions.

Sarah Parrott is a mom, she was inspired by her mom to be a fashion designer.  She is making a sexy shift dress that will appeal to women 18 to 40.  Ross  Bennett  is married, loves to hunt and fish, most of his clients are attorneys and he is here to win it!

Ross’s designs are classy but I wasn’t crazy about the pants, it threw the off the look. Sarah”s dresses are ok, I loved the teal one most of all.

Jessica loved Sarah’s shift dress designs, the teal was her favorite.  John tells Sarah that she needs to raise the bar, but he loved it. John did not look Ross’s pant design, he thought they were from another time and didn’t fit for today. Jessica did not find that Ross’s pants were a good fit and Nicole didn’t like how the pants grabbed the women in the front.

Kara Lariicks creates clothes that are masculine meets feminine. It’s a little bit risky, a little bit avant garde. Nzirmo Oputa grew up in Detroit and it was engraved him that he would be successful.

Strangely, I liked Kara’s designs, Nzirmo’s designs were ok but I think the horrible male models threw it off.

Nicole loved Kara’s representation, phenomenal but she didn’t like that someone else designed them. John didn’t feel that the clothes showed enough of who Kara was. Jessica feels there is something cool and unique about Kara. Jessica loved Nzirmo’s designs, so did John.

The buyer’s three bottom designers are Nicholas, Oscar and Kara, it is time for the mentors to save someone who they think deserves another chance. Nicole announces that they are saving Oscar.