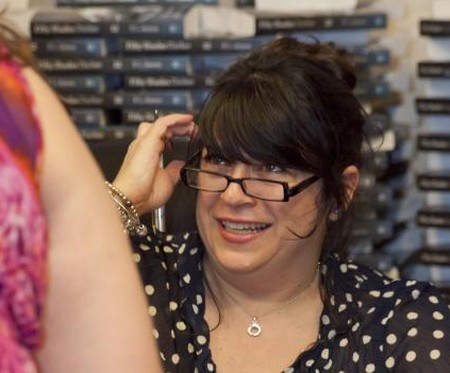 Move over Twilight, so long Hunger Games – bring it on Fifty Shades!  Ok, on a serious side – I would never abandon you Robert Pattinson, but I would happily share you with Christian Grey, the billionaire heartthrob at the center of E.L James blockbuster novel, Fifty Shades of Grey.

E.L, a forty-something married mother of two teenage boys was recently interviewed by USA TODAY and opened up about the wild roller-coaster that she has been on.

“It’s really exhausting, and I find all the hoopla around it extraordinary.  But it’s great to meet people who really love the books, just to say thanks, if nothing else, and just exchange a few words. I really enjoy that.”

James began her book tour in late April and she admits that her newfound fame and fortune has been extremely overwhelming.  You think?  For those who have been living in a bubble and don’t know anything about the books – I’ll say this:  if you’re interested in erotica and S&M, it might be up your alley, or if you’re someone like me who can find a love story in anything…well, just read it.  It will do you good.  The two main characters, Anastasia Steele, a ‘virginal college student’ and Christian Grey, a ‘handsome young billionaire’ enter into an erotic sexual submissive relationship.  Enough said.

Of her fans reaction to the trilogy series, James said this:

“It’s a combination of things. Fundamentally, people like a good love story. That’s it,” she says. “They like the sex as well. They love Christian Grey, a complicated, damaged, talented man. He’s very capable and strong and domineering but broken. So he’s a fixer-upper. I mean, it’s a fantasy — the whole book — and so they bought into it and suspended their disbelief. Gone on a vacation really.”