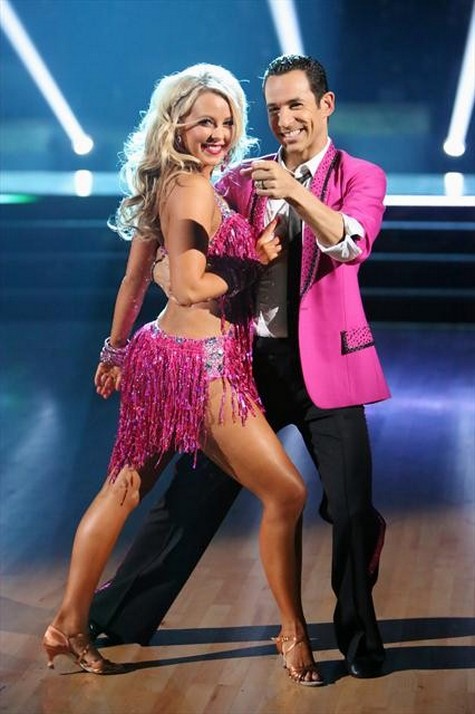 Helio Castroneves danced the Foxtrot for her reinterpretation of an iconic dance on DWTS.  Helio and Chelsie chose to recreate Apolo & Julianne’s season 4 quickstep  on Dancing With The Stars All-Stars 2012 Season 15 tonight.  All the 11 remaining couples hit the stage tonight to reinterpret an iconic “DWTS” dance and face a double elimination on this week’s Dancing With The Stars.   If you missed the show, we recapped tonight’s show for you and if you want to see how all the couples did go HERE!

Helio Castroneves and and professional dancer Chelsie Hightower, dancing the Quickstep.  Helios said this about their dance tonight, “He knews that Apolo’s quickstep was fabulous and he also knew that he has to really step it up to make it better!”

Judges’ Comments:  Len: “This dance deserves to be back next week, it was top notch.”  Bruno: “It was absolutely brilliant in the beginning, but when you stepped on her dress it went down.”  Carrie Ann: “It was so good, I love when you do Quick Step, it was joy.”

Watch the video below and let us know what you think? Do you Helio did enough to win the Mirror Ball Trophy? Sound out in the comments below!