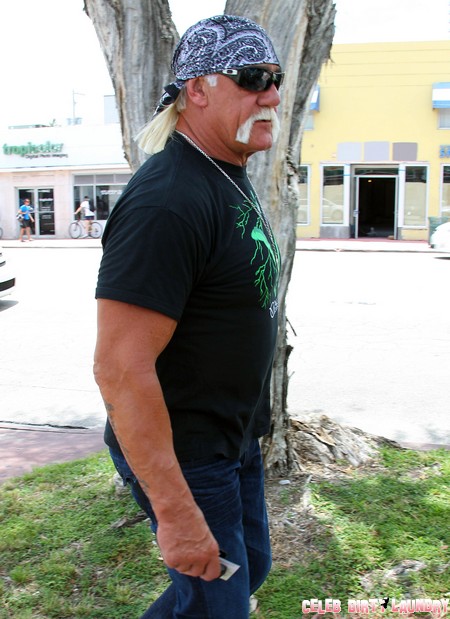 Don’t say Hulk Hogan doesn’t have any self worth—he has 100$ million worth. The ego maniac is suing Gawker and his ex-BFF for the leaked sex tape footage that was uploaded earlier this month. His friend Bubba The Love Sponge Clem denies that he is responsible for the leak. Of course, the woman in the video is believed to be his wife, Mrs. Love Sponge, also known as Heather Clem. The tape has been a huge embarrassment to Hogan’s family, and is only one of many sex tapes that no one ever wanted to see. Now, it seems like a sex tape with Kim Kardashian could only help his failing career.

Speaking from a court in Tampa, Florida, Hogan’s attorney told news media, “Mr. Hogan had a reasonable expectation of his privacy, just as all Americans have a reasonable expectation of their privacy in their bedrooms.” That doesn’t really seem applicable though, since this is Hogan’s 49th sex tape (or so—guy’s got a lot of them out there). And it’s not like he is secretive about his private life. Hogan is a raging sex monster—a totally open book that no one wants to read.

This morning, Bubba went on a radio show, hinting that Hogan may be the one responsible for the leak! TMZ reported that Bubba said, “At the end of the day, I can’t even comment on the validity … [Hulk] could have had something to do with the leak of it.” He also reminded listeners that the sex was consensual, telling Hulk, “Nobody put a gun to your head.” Apparently their relationship is completely over, and the two hate each other. Bubba called Hogan “self-centered.” He has hired a legal team to defend him against Hogan’s claims that the tape was made without his consent.

Apparently Hogan’s past actions won’t be considered yet, as a lawyer on Team Bubba also commented, “This has caused harm to Bubba and he didn’t release it, he didn’t condone the release of it. He wants to find out who did that and he wants that person to be held accountable.” Poor guy can’t catch a break! Cheating wife, now a huge lawsuit. Fortunately Hogan has plenty of room to move on to other fish. His female counterpart of taped whoredom, Kim Kardashian, has no understanding of the distinction between good and bad press, and will probably queue in line to be his next costar—good news for him, since she’ll say yes to anything if it means getting a shout out on E! news.