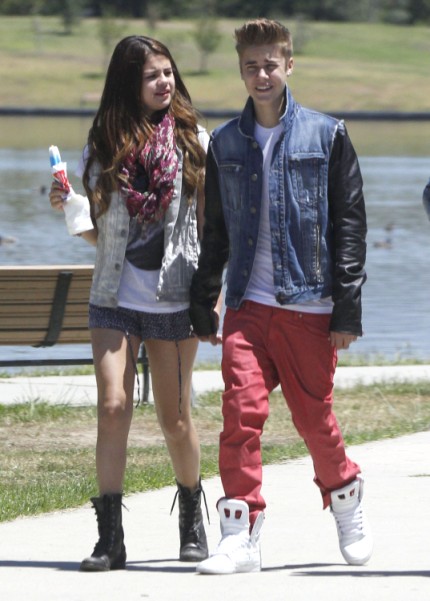 In his newest interview with Top of the Tops, boy wonder Justin Bieber described in eye rolling detail what he looks for in a chick. It’s kind of a weird question since everyone knows he’s still chaining himself to Selena Gomez but somehow the Biebs manages to make his fans’ hearts flutter while simultaneously complimenting his girlfriend of two years. This kid is good.

“I’m attracted to someone who’s a good listener, who is there for me and who pays attention to what I am saying,” he said. “Also, I’m very affectionate so [I] need someone affectionate like me.”

God, the idea of having to pay attention to someone whenever they’re talking sounds so draining. Along with all that puppy love affection, I wouldn’t be able to handle it!

But Selena can which apparently makes her the best girlfriend in the ENTIRE WORLD. Justin said, “She’s (Selena’s) hot. Of course, every guy likes their girl to be hot, which Selena is. But I like to mess around and pull jokes, so I like to be around people who make me laugh and share my sense of humor. That’s Selena for sure. She is a really great person and I think she has one of the best smiles in the world.”

Too much sweetness. Just too much! But do you think Justin and Selena are getting into that grey area of being more friends than boyfriend and girlfriend? It happens. People get familiar. People get bored. People start to look around. Obviously, all relationships should be based on friendship but that isn’t usually the case for young lovers in Hollywood.

There were those break up rumors this summer that had many thinking the end was near for the young couple but they managed to keep it together. I was sure Selena would break the chain while she was hanging with her Spring Breaker co-stars a few weeks ago. She looked pretty happy on her own. But these two crazy kids are determined to keep their romance alive! How much longer do you think they have? Are you ready to see Justin and Selena break up and for Selena to date dudes her own age?