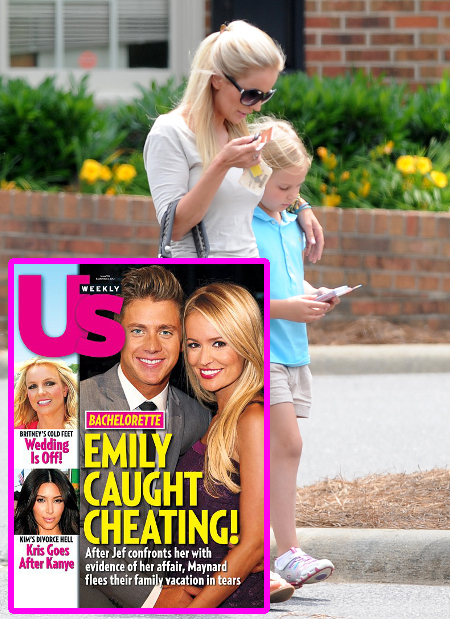 Things are continuing to get heated up between Jef Holm and his brother Mike Holm, who recently came out of the woodwork to validate the new US Weekly cover story, which reports that The Bachelorette‘s Emily Maynard cheated on Jef Holm. The magazine reports that Jef Holm stumbled upon several racy texts between his wife and some dude, which resulted in a massive argument that, ultimately, led to Jef walking out on Emily. However, despite all the scandalous rumor-age going around, Emily and Jef appear to have a relationship sweeter than honey and are firing back at Mike for his back-stabbing commentary.

Jef says his brother has a history of being a dishonest member of their family, and he’s doing everything in his power to destroy any of his credibility. “If everybody knew the history he had with our family, no one would be surprised. [He’s] been cut off from a lot of family things because he’s so dishonest.”

Jef further explains: “I like to give Mike the benefit of the doubt and think he’s changed, but obviously he hasn’t. He has a history of doing hurtful things to the family,” says Holm to People Magazine. “He’s been cut off from a lot of family things because he’s so dishonest.”

After news of the scandal broke, Jef immediately whipped out his phone and called all of his family members, including his brother. “I called every single member of my family and asked them if they’d done anything, and he promised me he hadn’t. It’s so disturbing to think that a family member would do this. As hurt as I am, I love him and I love my family.”

Wonder what the next step will be for Jef and Emily? Do you think there’s anything to worry about? Is their relationship on the rocks? If it is, they’re putting up a very good smokescreen, because the couple has been seen out and about on several occasions. And they’re all smiles. Both Jef and Emily have denied any occurrence of an affair. But, as always, your word is the final word. Tell us what you think: Has Jef and Emily’s relationship been tainted with the poison of cheatery?

Image credit to US Weekly / FameFlynet