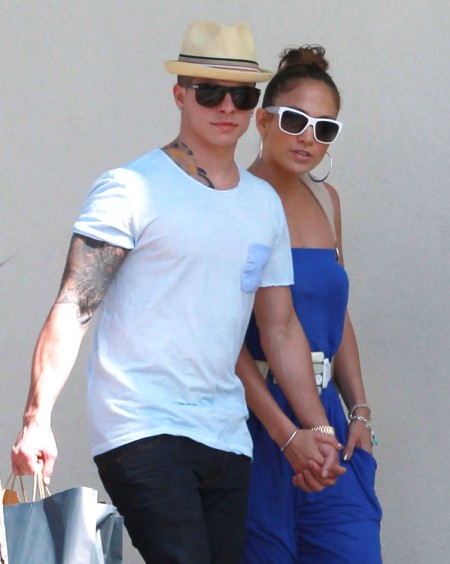 Casper Smart wants Jennifer Lopez all to himself and is urging her to quit her judging job on American Idol. It seems Casper doesn’t like Jennifer hanging with the young hotties backstage and wants her to focus on their relationship.

In Touch Weekly has learned that in an effort to keep 25-year-old Casper Smart happy, Jennifer Lopez is about to undo the smartest career decision she ever made – and give up her job as an American Idol judge.

Jealous of all the time she was spending away from home – and with cute Idols like Phillip Phillips – Casper urged her to quit the plum gig and focus on their relationship instead. And remarkably, J.Lo is listening. Although Jennifer tweeted on may 17 that she hadn’t “decided what I am doing next year,” sources tell In Touch that the star has already informed Idol brass that she won’t be coming back next season.

“Casper would love it she would just chill out and travel with him,” explains a friend, adding that as ambitious as she is, J.Lo has also been overwhelmed – and he picked up on that. “She had her relationsip, music, movies, Idol and being a good mom,” the friend shares. “She loved being on Idol, but something had to give, so she took Casper’s advice.”

J.Lo’s closest advisers wish she hadn’t. Most recall her career was in a lull before her Idol-inspired comeback.

“If anything should go, it should be Casper,” huffs the friend, who marvels at the increasingly important role Smart is playing in Jennifer’s life. “Everyone is annoyed that Jennifer is taking business advice from Casper.”

Jennifer’s friends worry that Jennifer has fallen too hard, too fast for Casper, and she barely knows him. An insider observes, “She’s a fool for love.”

I don’t really care if Jennifer leaves Idol. It seems to have worked its purpose and her career and music are in an upswing which she needed after years of being married to boring Marc Anthony. But if she does it to placate this child then I’ll be upset. She’s already pitched him to be a reality star, what more does this kid want? What relationship does he want her to focus on? The one where she gives him things and he tells her what to do? Why can’t she see that?

They are just at different points in their lives. His broke ass self wants her to fund his world traveling when she should be with her kids making the easy Idol money. I know I keep asking this question but when will this woman learn to separate business from pleasure?? And why is she letting this nasty pipsqueak dictate orders? What the hell?