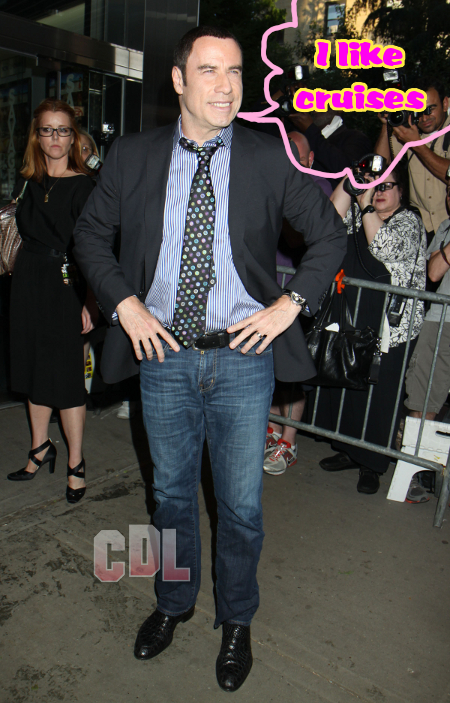 John Travolta is still wading through this crazy cruise ship sex scandal. After filing court docs yesterday with Hollywood legal giant Marty Singer, Travolta says that he doesn’t deny that he was on that cruise, but he does flat out deny the allegations that claim he gave steamy sexual favors to Royal Caribbean employee Fabian Zanzi.

Poor old JohnT continues to find himself sailing across rough seas and, with the court battle seeming to pick up some steam again, I have a feeling it’s going to be a while until he finds himself on smooth waters. Travolta, in addition to denying Zanzi’s allegations, also made the courts aware of the fact that, while Zanzi did report this “incident” to the proper cruise ship authorities, he failed to include the “sexual misconduct” details in his initial report. Woops.

In TMZ’s official report — which includes the video of Zanzi detailing his allegations — they say: “Travolta also reiterates his point that Zanzi filed a report with Royal Caribbean over the alleged incident when it happened … but failed to mention any of the sexual details [. . .] Travolta wants the lawsuit dismissed and for Zanzi to pay his attorney’s fees.”

The funniest part about all of this is the fact that Travolta wants Zanzi to just forget about the whole lawsuit, drop the charges, and, on top of everything, just pay all of his legal bills. While there’s always the possibility of this blowing up so big that Zanzi chooses to retaliate in light of growing, unwanted media attention, we’re not betting on that outcome. Zanzi seems like the type of person that’s going to ride this wave out . . . and make sure John — whether he’s lying or telling the truth — endures some legal drama that he’ll be able to remember for as long as he’s Stayin’ Alive, Stayin’ Alive *oh, oh, oh, oh* Stayyyin’ Alive. What are your thoughts on the John Travolta gay sex scandal?