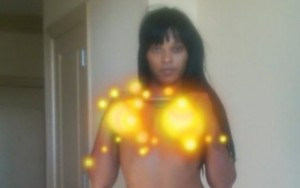 Joseline Hernandez, real name Shenellica Bettencourt, has decided to post a nude photo of herself to prove that she is not a tranny! Yesterday numerous reports were swirling saying that the Love & Hip Hop star is not only banging an already involved Stevie J, but cast members were telling the media that Joseline is a gold-digging he-she. Now THAT is quite the title to have, wouldn’t you say?!

Well instead of using words to defend her sexuality and the harsh claim, Hernandez decided to prove the skeptics wrong by posting a nude photo of herself exposing her lady bits. Yes, she let it all hang out and yes, from what it appears she is a real woman. I guess that is one way to get the people to quit talking.

Check out this message Joseline put up via her Twitter page:

In case you all missed it, the Love&Hip Hop premiere had fans of in an all out uproar because Stevie J, who is in a long term relationship (over FIFTEEN YEARS) with Mimi Faust (and has a child with her) is having an open affair with Joseline Hernandez, ex-stripper and wannabe musician. Stevie, who is a producer, has been working with Joseline in the studio and that is where these two have supposedly been getting their freak on! During last night’s show, things got heated between all those involved in the love triangle and from what it sounds like, Stevie J has chosen Joseline over his baby mama!

We shall see what happens next when the new episode airs next week. I’m sure it is not going to be pretty. 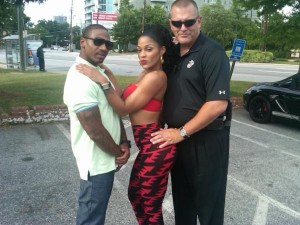