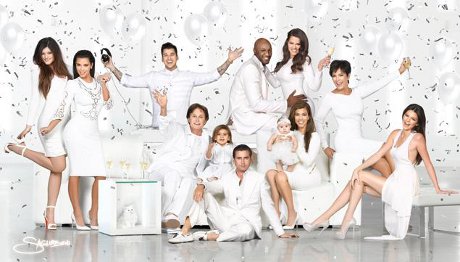 It just wouldn’t be Christmas without fresh snow on the ground, carols and the Kim Kardashian family using the holiday to celebrate their relevance. Kim, Kourtney, Kris and the other members of the K bunch have released their annual Christmas card featuring enough sugary smiles to rival any Walmart ad but the Kardashians are their own enterprise.

Despite all the hits that their brand has taken in the past 12 months, they are yet still around and denying all of us the gift of their absence in pop culture. In fact, they seem to be more omnipresent than ever. Khloe is starring on X Factor, Kendall is slaying magazine covers, Kourtney just had another baby to keep those covers coming and Kim proved her resiliency by hooking up with Kanye West.

The rapper gave Kim an early Yuletide gift when he let the world know that Kim was his “bitch”. He also rapped about how she became a superstar because of her sex tape. The sonnets of true love couldn’t have been more eloquently spoken, but wherefore art thou Kanye on the latest Kardashian advertisement? For someone who is so in love with himself, he deserved to have a placement along with the rest of the happy narcissists.

Kanye’s exclusion may be a klue that there just may be trouble in paradise for the famewhores. Kanye and Kim’s mutual love of the cameras made them perfect for each other, but those warm and fuzzies haven’t been returned by the press. They were the “it” couple for about as long as it takes Lindsay Lohan to stay out of jail before other couples like Taylor Swift and whoever her latest boyfriend du jour pushed KimYe down the pap priority list. Even worse, the relationship is reportedly hurting Kanye where it hurts the most. No, not his ego but his wallet since their made for the tabloids romance is hurting his brand.

“His personal life is overpowering his music. Every time he plays, people are wondering if Kim is going to be there. It’s not a good thing for him, especially if he wants to be taken seriously,” an industry source told The New York Post.

Ticket sales have also been slow for his upcoming Revel show and concert goers walked out during his performance at the 12-12-12 charity concert benefit Hurricane Sandyvictims. At least he still has Kim. Although not really since she’s still legally married to Kris Humphries but it’s the thought that counts.