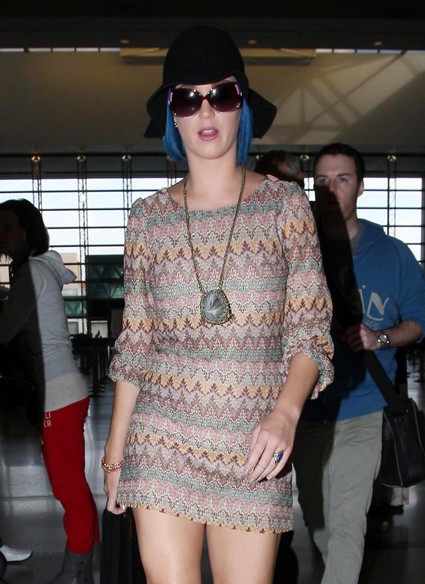 Russell Brand doesn’t want any of estranged wife Katy Perry’s money although he is legally entitled to plenty of it. Russell filed for divorce from Katy in December after just 14 months of marriage and didn’t sign a pre-nuptial agreement with her – and so is legally entitled to half her $44 million income during the marriage. However, Russell has told Katy he doesn’t want anything from her and wants their split to be as amicable as possible.

According to TMZ:  Russell’s lawyer filed final divorce papers Tuesday … although the judge will make the divorce official on June 30, because there’s a 6 month waiting period.  Informed sources tell TMZ … Russell and Katy did NOT have a prenup. As a result, everything they earned during their 14-month marriage is community property — which means they’re each entitled to 50% of the pot.

Katy made $44 million between May, 2010 and May, 2011 — according to Forbes. The couple Married in October, 2010, so Russell could have scored a fortune if he exercised his community property rights.  But here’s the deal. As one source put it, “This divorce is as amicable as it gets, and Russell was a mensch (Yiddish for a good person).” He doesn’t want Katy’s money. He’s happy to walk away with the money he earned — which is far less than what Katy raked in.

Russell has started dating again and was is already seeing more than one woman. Sources said Katy had been told that her estranged husband – who has previously been treated for sex addiction and substance abuse issues – had moved on from their marriage. One said: “She discovered through her friends. One of the women told a friend of hers and it got back to Katy.”

Katy herself seems desperate for a man. Her recent Super Bowl antics involving Tim Tebow smack of a someone who is hurting.