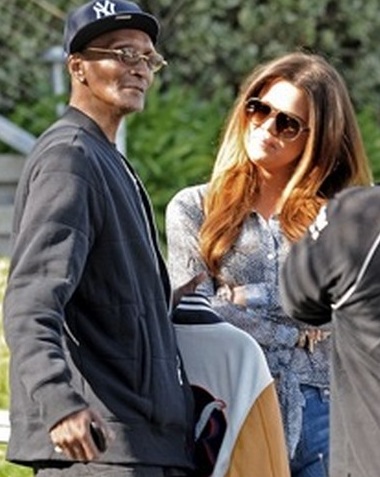 Speculation ran rampant on Wednesday night after Lamar Odom was a no show at the Lakers vs. Mavericks game. It turns out that Lamar was absent because he was flying to L.A. with wife Khloe Kardashian to be close to his estranged father, Joe Odom, following a “serious health scare”.

“He has been excused to tend to a family matter. He will rejoin us after the [All-Star] break,” Said Dallas Mavericks Coach, Rick Carlislie, in a post game interview. It has to be serious for Lamar to leave during the peak of the season, especially when he is still working out the kinks with his new team.

While Lamar has not officially commented on the news of her father’s illness, Khloe made a cryptic reference to today being a “Weird day…” on her twitter account. A source close to that 32-year-old NBA player told RadarOnline, “Khloe and Lamar were really upset about the news about Joe. They’re putting their schedules on hold right now to be there for him.”

No word yet on his condition or the cause of the illness, but RadarOnline also reported that they spoke to an incredibly vague Joe Odom this morning. “I’m doing a lot better. But I’m depressed right now. I’m getting some rest,” he is quoted as saying. “It is a problem that I had.”

Lamar’s strained relationship with his father has been an ongoing topic on E!’s “Khloe & Lamar,” and Lamar has been candid on the reality show about his father’s ongoing battle with heroin addiction. Lamar’s father abandoned him as a child and his grandmother raised him following his mother’s death from cancer. While Lamar has pushed against her efforts, the show has often documented Khloe’s attempts to get the Lamar to reconcile with his father.

Odom is scheduled to return to the Mavs next week.