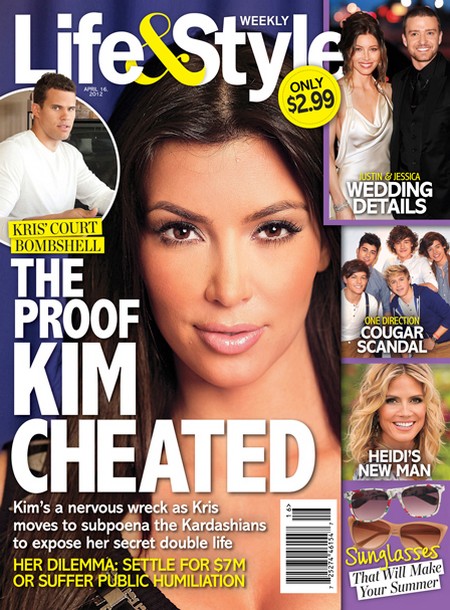 Kris Humphries is going to drag Kim Kardashian and all the other Kardashians and some Jenners to court to prove that Kim cheated on him and in the process prove that their reality TV shows are 100% fake.  Speculation is raging that Kayne West and Kim slept together during Kim’s 72-day marriage.  Kris’ team has proof that will destroy the credibility of the Kardahsian/Jenner enterprise forever.

This week’s cover of Life & Style has the story ‘The Proof Kim Cheated’ and warns that:   “Kim’s a nervous wreck as Kris moves to subpoena the Kardashians to expose her secret double life”  “Her dilemma – settle for $7million of face public humiliation”

Life and Style Reveals:  Life & Style has exclusively learned that Kris plans to subpoena Kim’s close friends and family in his attempt to uncover evidence to help him prove Kim only married him for financial gain and that she never intended to stay married.

“He’s ready to subpoena friends and family as well as producers of her reality shows,” an insider tells the new issue of Life & Style. “Once a subpoena is granted, it opens the floodgates for all types of evidence: emails, text messages, phone calls and more.”

“There are emails between Kim and Kris that would prove a lot of things, like series setups, staged events and scripts,” alleges the insider. “He knows that if asked under oath whether any of their shows are fake or staged in any way, the Kardashians would have to say yes.”

Determined to clear his name, Kris is even fishing for evidence that Kim could have cheated. “If everyone gets subpoenaed and is forced to speak under oath, she’ll be exposed,” the insider adds.

“Kim just wants the divorce to be settled and behind her,” a Kardashian insider says. “She thinks Kris is being a bully.”

Nobody looks better after a nasty public divorce than they did before and Kim and momanager Kris Jenner know this well.  Whatever her estranged husband and his legal team reveal during a divorce trail will not help the image of Kim or the other Kardashian Klan members.

At best, there will be more attention drawn to the quickie marriage and quickie divorce which in and of itself an insult to Kim’s public.  But if it is revealed that Kim was unfaithful to confused Kris during a 10 week marriage then Kim will forever be the despised laughing stock of the nation.

Did Kim cheat on Kris with a secret lover during her made-for-TV marriage?  Certainly she betrayed most of her marriage vows in any case.  Was there any love between these two or were we treated to a giant showmance?  From the way Kris and his family talk now, and this has been consistent since right after Kim filed for divorce, he was fooled right from the start.

Kris wants the court to annul the marriage on the grounds that Kim faked her intentions right from the start.  This would free Kris from the gag order he agreed to when he signed the prenup.  Imagine what Kris could tell us if her were free to? Kim wants none of this – neither a divorce trial nor a hearing to get the marriage annulled – so we expect her to do anything she can to stay out of court.