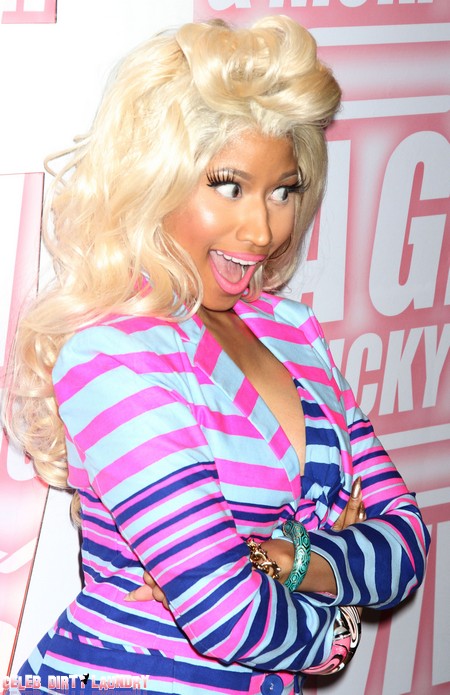 Nicki Minaj had not one, but several nip slips on American Idol last week.  During Minaj’s performance of her new single ‘Starships’ you can see her left breast flopping its way out of its skimpy restraint at least 3 times during the video of her performance.  At least I did… and so apparently did Ryan Seacrest.

Ryan  remarked:   “there were parts of that performance that were a little high risk, if you know what I’m saying.”

Nicki seems to think that she is best when she is overexposed as this is not the first time she has been entered in the nip slip category.  Nicki’s run-in with judge Jennifer Lopez and her fashion faux pas seem to add up to a rather slippery Idol night for the celeb.  Nicki’s little verbal voodoo exchange with J.Lo during the show seems to have escalated into a war of words between the two.

Global Grind reports:  Nicki Minaj just can’t get those lady lumps to behave!  It’s looks like the femcee’s boobies had a plan of their own during her performance of her new single “Starships” on American Idol.

The Barbz queen went above and beyond for the show, with a cool dance routine but amidst the moves it looks like one of Nicki’s boobies slipped out of her cleavage baring top.

Nicki caught it just in time, quickly turning away from the camera to adjust those lady lumps and put them back in place.  Witty, Ryan Seacrest later commented “there were parts of that performance that were a little high risk, if you know what I’m saying.”

The Young Money first lady definitely gave the crowd what they wanted and more!

This isn’t Nicki’s first nip slip and we hope its not the last!

Check out the American Idol nip slip around the 1:40 mark in the video above.

There is really no such thing as a nip slip.  These little accidents are all planned out and calculated by the stars and their mentors to maximize media coverage.  Nicki’s were no exception.  Do you agree?