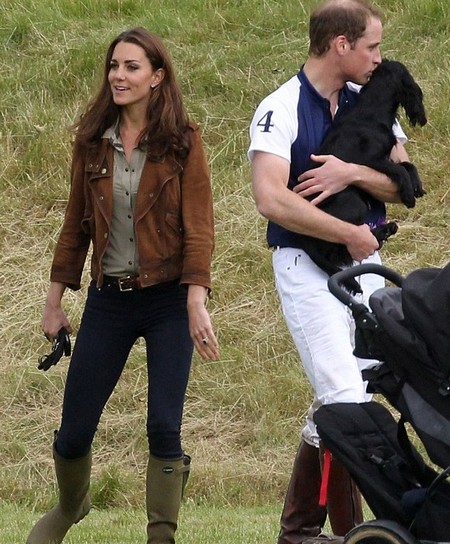 Today at Beaufort Polo Club’s exhibition match, in UK’s National Arboretum, both Kate Middleton and Prince William were seen having a day out with their family dog. This is a much better royal image spending time with the family, than getting drunk while clubbing with your friend.

The couple brought Lupo, their cocker spaniel, who is about six-months old to the exhibition to show everyone how much of an awesome and majestic creature he is. Prince William was seen holding the dog and that’s not all he did, he also participated in the polo exhibition while his cousins and other people at the match, enjoyed spending time with Lupo. It would be an adventure for most people to go to a polo match, but imagine this adorable cocker spaniel enjoying the day with his owners and getting all that attention from everyone else.

The polo exhibition Prince William participated in was for a charity event, he was helping to raise money for two children’s charities called “Tusk and Well Child and Child Bereavement.”

During the morning Kate Middleton, the Duchess of Cambridge, who by the way I consider a hottie hot hottie, spent the morning with a bunch of school children at a Primary School, “Expanding Horizons” camp in Kent, England. Kate sat with the children around a fire and took the time to speak to them. When she left, one of the young campers said, “I asked her what it was like to be a princess. She said she gets treated very well and William is very sweet and kind and spoils her.”

It’s good to know that Kate is happy being a princess and married to Prince William, the guy seems extremely nice towards his wife and considerate of those who are in need, much like his mother, Princess Diana.