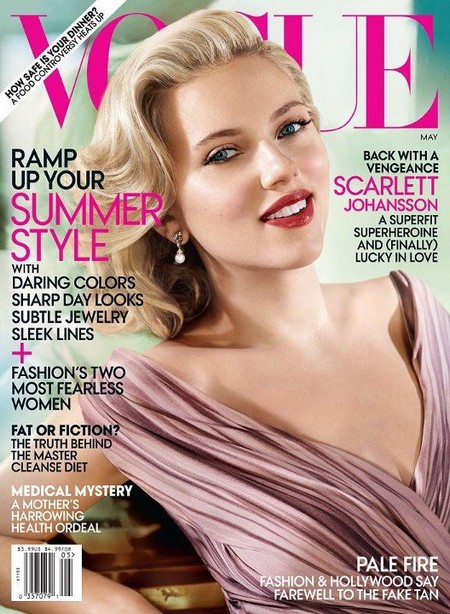 Scarlett Johansson opens up apart her embarrassing victimization by a hacker in the May 2012 Issue of Vogue.  Scarlett’s personal naked pics were spread over the internet after Christopher Chaney successfully hacked her cell phone.

Scarlett explains that she is working at putting the past behind her but that it still hurts.  She says she is still embarrassed when she realizes strangers who she her have also seen her private parts.  Since she poses for covers in various states of undress and has done so for years we fail to see what the big deal is.  An example of Scarlett posing topless for money is RIGHT HERE.

Excerpts from her Vogue interview:  “It wasn’t just me,”  Scarlett explains that other stars such as Mila Kunis and Christina Aguilera were also targeted by the same hacker – she also tells Vogue why she decided to go to the authorities rather than simply lie and pretend that the photos weren’t actually of her – she says they were intended only for the eyes of Ryan Reynolds, her then-husband.

“It was others. I don’t want to be a victim and say, ‘Oh, well’ and just hide my head in shame. Somebody stole something from me. . . . It’s sick. I don’t want people like that to slide,” she says.

“When all those photos came out, of course I go out to dinner and think, ‘Goddamn it, these people have all seen my. . . .’  Johansson’s voice trails off. “That’s terrible. You know what I mean? You can’t not think that. Even if they haven’t, you’re paranoid.”

“I don’t want pity,” she says, explaining that she dealt with it by “tuning it all out,” which inevitably made her stronger in the end.   I have to say I’m way happier because of it,” she says. “It’s nice. It allows me, I think, to be more creative. It’s nice not to be so self-aware.”

We can assume that Scarlett wasn’t overly traumatized by the hacking/leaking experience since she has posed nude or semi-nude several times since then.   In any case, celebs now are well aware that data or photos stored on electronic media are not secure from prying eyes.  What do you think about all this?  Let us know in the comments below.