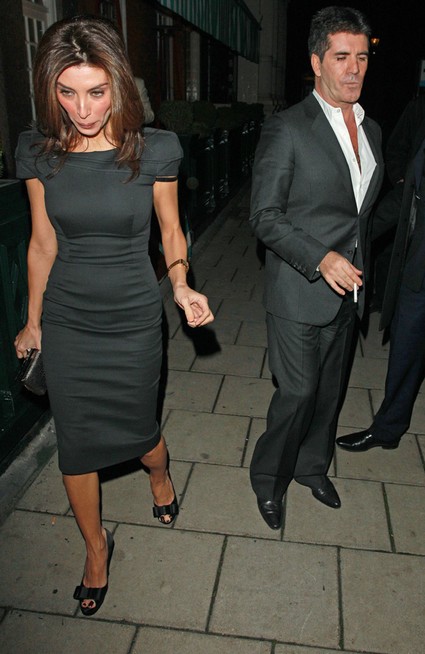 While Simon Cowell insists that he is still speaking to fiance Mezhgan Hussainy “all the time,” their relationship is definitely on the rocks. In fact the couple have not been spotted together for more than two months and Cowell confessed to the Sun that there will be no wedding bells anytime soon.

Cowell was cavorting last week with a bevy of beauties aboard his luxury yacht in the Caribean – but poor Hussainy was nowhere to be seen. The group of women included his ex-girlfriend Sinitta and sexy divorcee Zeta Graff – not exactly a crew designed to please an absent fiance.

In the Sun interview Cowell sounded ambivalent about the status of his relationship with Hussainy:  “None of those women were girlfriends. They’re just friends, 100 per cent.  I talk to Mezhgan all the time. Everything is fine. But I didn’t say there would be wedding bells soon.”

Previously there was talk from both sides that implied that all in the relationship was not rosy.

Cowell claimed he was “not sure” whether he is still engaged to the 38-year-old beauty, and his 86-year-old mother, Julie, said:

“I honestly don’t know, I’ve hardly seen him. I saw him three days last week and he was working constantly, of course, every day in the studio while he was here. I met him briefly for dinner and he didn’t discuss anything with me. He’s very private, Simon, about his personal life. He won’t talk about it, so I’m as much in the dark as everyone else.”

“I haven’t seen Mezhgan for months – she’s been in America all this time and I don’t know if she’s working or what, because she has her make-up company and is very busy.”

Of course the couple, if they are still a couple, knows exactly what is going on. Us fans have to rely on innuendo, rumor, and observation.