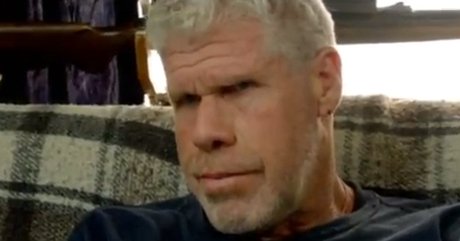 Sons of Anarchy is already in its seventh episode of its fifth season and, as the title for next Tuesday’s episode suggests, this series continues to be one wild ride. We love spoilers and previews, but we understand that not everyone lives in our SPOILED world, so if hints and teasers make your stomach queasy, then divert your attention to one of our other articles. Did you hear how Nicole Kidman is bringing the whip out on Keith Urban? Sons of Anarchy Season 5 Episode 7, entitled “Toad’s Wild Ride,” will air Tuesday, October 23 at 10 P.M. ET on FX. So don’t miss it. In the meantime, check below for some quick teasers!

In the upcoming episode of SOA, Gemma gets robbed. She shares her story with Jax, telling him that her wallet was stolen by some guy whose name she can’t remember. Let’s just say that Jax don’t give no craps because he responds in a very unsympathetic manner. “Who are you?” he says with a particular rudeness.

The latest episode of SOA revealed that Clay was up to no good and was, in fact, the person behind the break-ins of the SAMCRO members’ houses. Ron Perlman, the actor behind the dark, troubled character, revealed, “I actually started off this season trying to play this character in a weakened state, and in a more introspective state. Only to find out later that he’s not taking the time to figure shit out.”

He continues: “He’s going to work immediately on correcting these things that he considers to be wrong. The notion to have him immediately take measures to gain back the club, by any means possible, even if they are as nefarious as this, was [creator] Kurt [Sutter]’s choice.”

Make sure to check out next week’s episode! Another gunshot will happen *gasp* and it’s revealed that SAMCRO’s former leader is up to some no-good-funny-business. Meanwhile, Clay and his companions place blame on each other for a situation that involves a cop and a dead woman. Hmm, interested to see where all this leads? Tune in next week, and don’t forget to check out the preview video below.