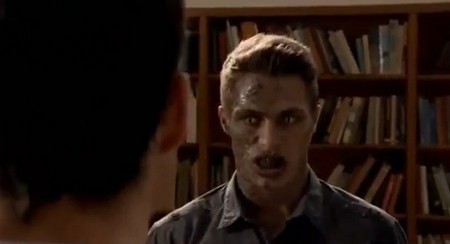 Tonight on MTV is an all new episode of Teen Wolf. On tonight’s show called ‘Restraint’ Lydia begins to make connections about the bite from Peter. If you missed last week’s show called “Frenemy”, we have a full and detailed recap here for you.

On last week’s episode Scott and Stiles uncovered new evidence about the shape-shifter. In the mean time, Allison was given an assignment by her family.  The Kanima aka Jackson attacked everyone, and Scott, Stiles and Allison did something about it.

MTV Official synopsis: As Lydia begins to make connections about the bite from Peter, Jackson causes new problems for Scott and Stiles while Derek has a crisis of faith in his leadership as a new Alpha.

On tonight’s show Lydia learns more about her bite from Peter. Derek starts thinking he isn’t a good leader for his pack and Jackson causes more trouble.

Tonight’s episode starts with a couple in an RV parked in the woods. Their generator goes out at night and the guy reassures his wife that it’ll get better. He goes out to fix things and his wife sees him talking to a shadow, then she watches as the Kanima’s take reaches down from a tree and strangles the man. The woman hides in the RV as her husband gets launched right through the window of it. The Kanima busts in and is nose to nose with her. He slowly drops down and we see that she is pregnant. The woman then screams.

Scott and Stiles end up in trouble at school and Scott’s mom attempts to throw the book at him. No internet, no car, no anything. She tells them they’ll talk more at home.  Derek, Isaac and Erica are talking and Derek is adamant that they have to find the Kanima before anyone else.

Jackson is in a classroom alone playing with spiders in an aquarium.  He reaches in and pulls out a huge snake that he proceeds to eat.  Just as he finishes basically inhaling it, his teacher walks in.

Jackson bumps into Allison in the hallway.  He offers to get her tickets for a concert and then sounds like he is gagging as he runs off.  He is in the locker room shower and she thinks he’s getting sick so Allison follows him.  She finds him naked and he corners her, telling her she can skip her next class.  Scott busts in and gets into a brawl with Jackson.

It’s time for detention and everyone is lumped in together. Jackson, Stiles, Scott, Erica, Allison. They’re all there. Jackson starts to have a problem and excuses himself to the bathroom.  Erica tells the gang that Jackson’s parents died in a car accident.  He is entitled to a huge settlement when he turns 18.  Jackson gets to the bathroom just in times.  The snake that he ate earlier comes out of his eyeball and slithers into the bathroom sink.

Scott gets called to the office where he is confronted by Allison’s mother.  She wants to know if he is having sex with Allison.  Of course he denies it.

The crew is still in detention trying to figure out how much about his past Jackson actually knows, when he decides to wreck havoc.  Lights are flickering and  books are flying, as a message appears on the blackboard.

Stay out of my way or I’ll kill all of you.

The chaos stops as Erica is lying on the floor having a seizure.  Scott takes her to get help.  Lydia goes to an empty house to meet up with a hot stranger.  She is sucked by him and as she kisses him everything changes and she realizes she wasn’t kissing who she thought she was.  Lydia screams for help as he comes at her.  He explains that she is his perfect plan B.