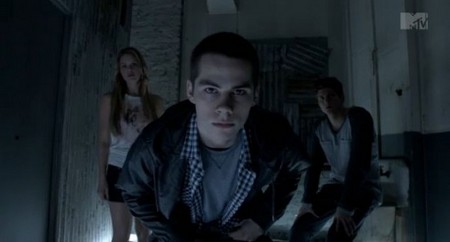 Tonight on MTV is an all new episode of Teen Wolf called ‘Raving’. On tonight’s show the most dangerous enemy is the one they would never see coming. If you missed last week’s show called “Restraint”, we have a full and detailed recap here for you.

On last week’s episode Lydia learns more about her bite from Peter. Derek started thinking he wasn’t a good leader for his pack and Jackson caused more trouble. Jackson caused new problems for Scott and Stiles while Derek had a crisis of faith in his leadership as a new Alpha.

On tonight’s show Chris, Scott and Stiles struggle with how to stop the Kanima; Scott and Stiles plan to trap the Kanima at a warehouse party, where Erica will also be present, while Allison’s mother plans to take Scott down. Chris and his team of hunters face Derek in a confrontation.

MTV network announced Teen Wolf has been renewed for a third season during their Comic-Con panel Thursday and the fans were super thrilled.  So we can look forward to another season.  Are you excited?

Tonight’s recap: Jackson gets a call on his beeper and he goes to a warehouse in a trance-like state. Scott is hiding in the corner and watching as Jackson walks into the warehouse where a group of people are waiting to purchase tickets. Jackson and Scott get in line.

The police officer and his son deduce that the dead mechanic, husband, and wife were all the same age and all went to the same high school and had the same teacher. They think the killer’s next victim will be found in that Chemistry class.

Back in the warehouse, it turns out the girl selling the concert tickets is one of the people in that class and Jackson comes face to face with her as he buys one ticket.Jackson’s weird behavior scares the girl off and no one else gets tickets.

Allison goes to the morgue and is interrogated by her father. He tells her that he knows about the Kanima and that there are two killers – one human and one not. He says Allison is responsible for the murders because she’s trying to protect her friends and not telling him everything she knows.

Scott, Derek and Stiles go to the vet to find a way to save Jackson. The vet tells them they are trying to catch two people: a puppet and a puppeteer. One killed the husband and the other killed the wife. The vet hypothesizes that the boys can catch the Kanima and Jackson since something that affects the kanima also affects its master.

Stiles and Scott go to school trying to score tickets to the concert and Derek ends up stealing some for them. Scott and Allison meet in a classroom and Allison tells him about her dad’s conversation and how he knows about the killers. Scott says he’s more worried about her mom. He tells Allison about her mom’s questions about their relationship. He says they should be seen dating other people to ward off her suspicions. Allison reveals she’s supposed to hang out with Matt and Scott’s all about it and tells her to make a big deal out of it in front of her mom – even kiss him if she needs to.

Allison and Scott end up kissing. Allison’s mom was watching the whole time.

The vet gives Scott and Stiles powder to spread around the concert. The vet says neither the Kanima nor Jackson will be able to pass it and then they will figure out who the Kanima is.

Stiles finds out his father was fired as police chief because of Stiles’ behavior. Scott and Stiles go the warehouse where the concert is taking place. Scott spies Allison with Matt and she tells him her father will be at the concert to capture Jackson. He freaks out at her because he thinks they will ruin his and Stiles’ plan to save Jackson.

Derek attempts to stop Allison’s father and the other wolf hunters from getting in the concert but they start shooting and fighting ensures. Meanwhile Jackson is in the club but gets stabbed with a tranquilizer gun by Isaac before he can get to his target. While running around the building, Allison’s mom runs Scott over with her car.

Scott wakes from getting run over to find Allison’s mom trying to kill him. She tries to make it look like he’s having an asthma attack.

Back at the club, Matt kisses Allison but she shrugs away and leaves him.

Stiles goes to where Isaac is holding Jackson. He interrogates Jackson and under a trance Jackson says the people he’s killing are all murderers because they murdered him. Jackson escapes from the room. He finds and kills his target who turns out to be named Kara Simmons.

Derek senses that Scott is dying and runs to his rescue. Allison’s mom catches him but she flees and Derek is able to carry Scott out of the room to get help.

The show ends with Allison’s mom showing her husband that Derek bit her!

Thanks for following along. Tune in next week!