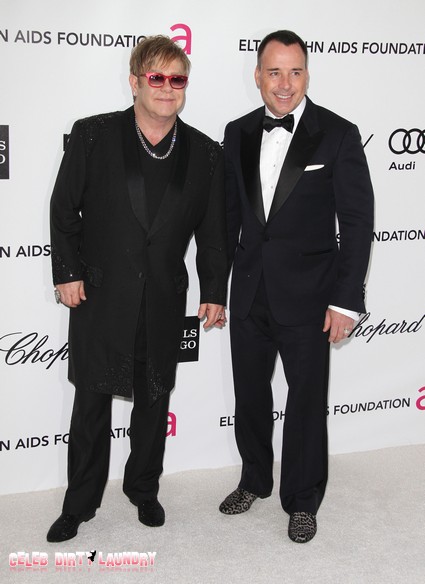 The 20th Annual Elton John AIDS Foundation Academy Awards Viewing Party took place at The City of West Hollywood Park in Beverly Hills, California on February 26, 2012.   A white carpet was rolled out for the party.  An hour before the televised 84th annual Academy Award show Sir Elton John and his husband, David Furnish, strolled down the white carpet . Bringing the proper amount of glitter to the affair, John was decked out in an embellished black jacket with his initials spelled out.

This year’s event will be sponsored by Chopard, Neuro Drinks and Wells Fargo.   The show featured a special performance by the Grammy Nominated and Billboard chart-topping band, Foster the People.

“We were thrilled when Sir Elton John asked us to play his Academy Awards party,” said Foster the People front-man Mark Foster.  “His foundation has globally impacted the lives of millions of people suffering from HIV/AIDS and we’re honored to be involved in any way we can.”

The Elton John AIDS Foundation (EJAF) was established as a nonprofit organization in the United States in 1992 and as a registered charity in the United Kingdom in 1993 by Sir Elton John. Together, both entities have raised more than $225 million for worthy programs in 55 countries around the globe since inception. Today, the Foundation is one of the world’s leading nonprofit HIV/AIDS organizations supporting innovative HIV prevention programs, efforts to eliminate stigma and discrimination associated with HIV/AIDS, and direct care and support services for people living with HIV/AIDS.