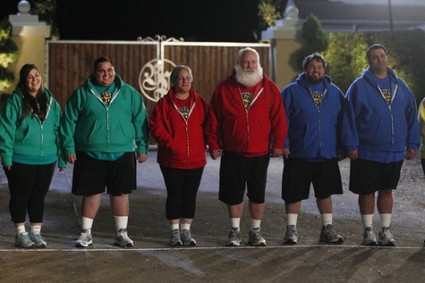 Last night was the premiere of the 13th season of The Biggest Loser and we recapped the episode.  The contestants found out right away that this season’s theme is ‘No Excuses.’  So I guess that means no whining this season. Before the contestants even got on the ranch two contestants were eliminated – the brother and sister team Adrian and Daphne.  They were told if they lose 50lbs in one month at home with no trainers they have a chance of getting back in the game.  What do you think of them sending 2 people home so early in the game?

The trainers made a big entrance this season: Dolvett hanging from a helicopter and Bob roaring in on a motorcycle. There are only two trainers this season, Anna could not take another season on the show.   Did you like Anna Kournikova on the show?  I wish Jillian would come back, what about you?

Alison interrupted the workout to tell them shocking news.  They found out that although they came as partners i.e. mother/daughter, father/son, brother/sister and husband/wife they would not be competing as partners but rather as individuals.   Alison told them, ‘”Let’s face it, sometimes we lean a little too much on the ones we love.  This is a season of no excuses. It’s also a season of no partners.” There was a lot of complaining in the beginning but they got over it quickly.

During the last chance workout Dolvett seemed to forget it was a ‘No Excuse’ theme season.  He complained about his team called them the ‘Bad News Bears’ and felt they were not working hard enough and was jealous of Bob’s team.   Even after all his complaining his team won the weigh-in.

One contestant Roy who looks like Santa Claus did not like either trainer by the end of the workout.  More than one contestant passed out during the two hour workout.  Do you think they push the contestants too hard?

At the end of show the person who should have gone home was Megan, she had the lowest percentage weight loss.  However, Ben asked the black team to send him home.  The team was not happy with the request he had the highest weight loss on the team this week.  They felt Ben would be a big help in beating Dolvett’s team next week.  Ben was homesick and he wanted to go home to his family and his pregnant wife.  In the end the black team honored his request.  Did the black team make the right decision by sending Ben home?

What did you think of last night’s show?  Sound out in the comments below and let us know what you think about our questions!